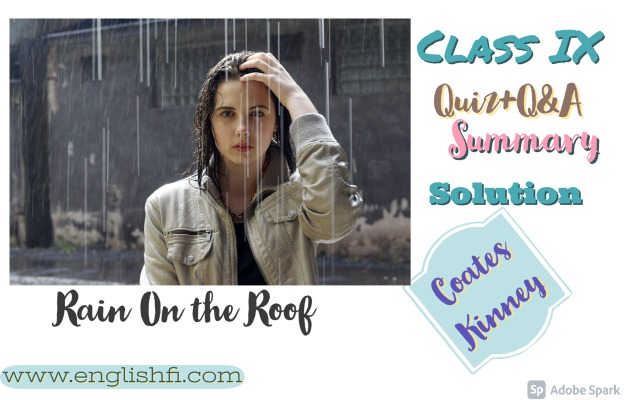 Today, I will be discussing all the important points related to the Rain on the Roof I ensure you will get a complete idea to write the summary, central idea, and explanation of the poem orderly. You will be able to write the specification and figure of speech used in this poem too. After reading this page you will find the secret to score outstanding marks in the board examination.

When the humid shadows hover
Overall the starry spheres
And the melancholy darkness
Gently weeps in rainy tears,
What a bliss to press the pillow
Of a cottage-chamber bed
And lie listening to the patter
Of the soft rain overhead!

Humid: something which is full of moisture.
‘shadows’ refers to the moisture-laden clouds which cast a shadow on the earth.
Hover: Move around something
Melancholy: sad
Bliss: Happiness
Patter: the sound of raindrops falling on the roof.
Cottage chamber means the bedroom.

4)Transferred Epithet: In ‘melancholy darkness’, the darkness is not melancholy, but it refers to the sad
people.

The poet says that when the sky gets occupied by the moisture-laden dark clouds, it feels like all the sorrowful sadness wipes out with the raindrops. At such times, the poet loves laying on the bed and enjoy the tapping sound of the raindrops.

Every tinkle on the shingles
Has an echo in the heart;
And a thousand dreamy fancies
Into busy being start,
And a thousand recollections
Weave their air-threads into woof,
As I listen to the patter
Of the rain upon the roof.

Tinkle: short, light ringing sound
Shingles: rectangular wooden tiles used on roofs
Echo: repeated sound
Woof: the thread is woven across the loom
Patter: the sound of raindrops falling on the roof
Busy being: human beings and here, the poet himself

3)Personification: Recollection is personified when he says that they weave dreams.

4)Transferred Epithet: ‘dreamy fancies’ – it does not mean that the fancies are dreamy but refers to the
people who have dreams.

The poet says that when the raindrops on top of the ceiling of his house, he hears a ringing echo in his heart; and this pattering sound of rainfall generates many dreams in his mind by recollecting his old memories.

Now in memory comes my mother,
As she used in years agone,
To regard the darling dreamers
Ere she left them till the dawn:
O! I feel her fond look on me
As I list to this refrain
Which is played upon the shingles
By the patter of the rain.

The poet says that the rainfall reminds him of his late mother, who loved him a lot. He adds that the
whenever he listens to the sound of rain, he feels that his mother is looking at him with the same affection
with which she used to adore him in his childhood.

#1. The poet enjoys listening to

“Let’s just quiet and listen to the secrets the rain wants to tell.”…………John Mark Green