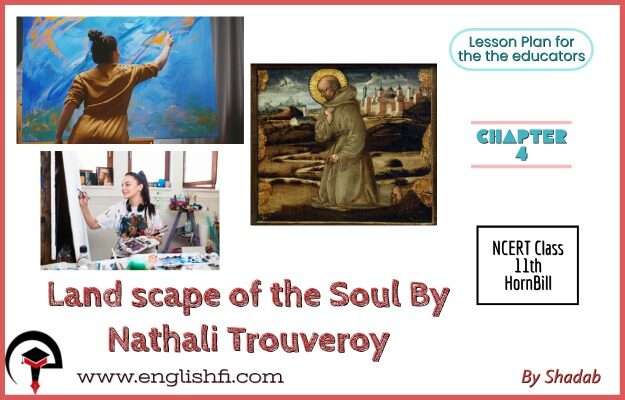 1. How many of you visited an art gallery or any museum? What did you find there?
2. Could you tell us any significance of art galleries?
3. How do you see the artist and painters.
4. Compare the imaginary power of artists with ordinary people.
5. Do you think a painter or artist can be a good story writer?
6. Any Indian artist who got fame globally.
7. Compare the new and ancient arts.
8. What can we predict from the masterpiece of art.

A WONDERFUL old tale is told about the painter Wu Daozi, who lived in the eighth century. His last painting was a landscape commissioned by the Tang Emperor Xuanzong, to decorate a palace wall. The master had hidden his work behind a screen, so only the Emperor would see it. For a long while, the Emperor admired the wonderful scene, discovering forests, high mountains, waterfalls, clouds floating in an immense sky, men on hilly paths, birds in flight. “Look, Sire”, said the painter, “in this cave, at the foot of the mountain, dwells a spirit.” The painter clapped his hands, and the entrance to the cave opened. “The inside is splendid, beyond anything words can convey. Please let me show Your Majesty the way.” The painter entered the cave; but the entrance closed behind him, and before the astonished Emperor could move or utter a word, the painting had vanished from the wall. Not a trace of Wu Daozi’s brush was left — and the artist was never seen again in this world.

Such stories played an important part in China’s classical education. The books of Confucius and Zhuangzi are full of them; they helped the master to guide his disciple in the right direction.
Beyond the anecdote, they are deeply revealing of the spirit in which art was considered. Contrast this story — or another famous one about a painter who wouldn’t draw the eye of a dragon he had painted, for fear it would fly out of the painting — with an old story from my native Flanders that I find most representative of Western painting.

In fifteenth-century Antwerp, a master blacksmith called Quinten Metsys fell in love with a painter’s daughter. The father would not accept a son-in-law in such a profession. So Quinten sneaked into the painter’s studio and painted a fly on his latest panel, with such delicate realism that the master tried to swat it away before he realised what had happened. Quinten was immediately admitted as an apprentice into his studio. He married his beloved and went on to become one of the most famous painters of his age. These two stories illustrate what each form
of art is trying to achieve: a perfect, illusionistic likeness in Europe, the essence of inner life and spirit in Asia.

In the Chinese story, the Emperor commissions a painting and appreciates its outer appearance. But the artist reveals to him the true meaning of his work. The Emperor may rule over the territory he has conquered, but only the artist knows the way within. “Let me show the Way”, the ‘Dao’, a word that mean both the path or the method, and the mysterious works of the Universe. The painting is gone, but the artist has reached his goal —beyond any material appearance.

A classical Chinese landscape is not meant to reproduce an actual view, as would a Western figurative painting. Whereas the European painter wants you to borrow his eyes and look at a particular landscape exactly as he saw it, from a specific angle, the Chinese painter does not choose a single viewpoint. His landscape is not a ‘real’ one, and you can enter it from any point, then travel in it; the artist creates a path for your eyes to travel
up and down, then back again, in a leisurely movement. This is even more true in the case of the horizontal scroll, in which the action of slowly opening one section of the painting, then rolling it up to move on to the other, adds a dimension of time which is unknown in any other form of painting. It also requires the active participation of the viewer, who decides at what pace he will travel through the painting — a participation which is physical as well as mental. The Chinese painter does not want you to borrow his eyes; he wants you to enter his mind. The landscape is an inner
one, a spiritual and conceptual space.

This concept is expressed as shanshui, literally ‘mountain water’ which is used together to represent the word ‘landscape’. More than two elements of an image, these represent two complementary poles, reflecting the Daoist view of the universe. The mountain is Yang — reaching vertically towards Heaven, stable, warm, and dry in the sun, while the water is Yin — horizontal and resting on the earth, fluid, moist and cool. The interaction of Yin, the receptive, feminine aspect of universal energy, and its counterpart Yang, active and masculine, is of course a fundamental notion of Daoism. What is often overlooked is an essential third element, the Middle Void where their interaction takes place. This can be compared with the yogic practice of pranayama; breathe in, retain, breathe out — the suspension of breath is the Void where meditation occurs. The Middle Void is essential — nothing can happen without it; hence the importance of the white, unpainted space in Chinese landscape. This is also where Man finds a fundamental role. In that space between Heaven and Earth, he becomes the conduit of communication between both poles of the Universe. His presence is essential, even if it’s only suggested; far from being lost or oppressed by the lofty peaks, he is, in Francois Cheng’s wonderful expression, “the eye of the landscape”.

Write the description of the following picture.

Group discussion –
Compare the creativity and intelligence of artists and engineers.