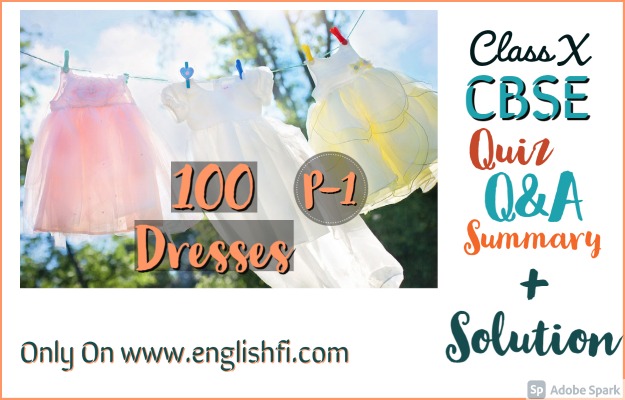 Today, I will dive in deep to discuss all the important points of the Chapter ‘ The Hundred Dresses (Part-1). I ensure you will get a better idea to write the summary and explanation orderly. You will be able to write a good answer. After reading this page you will find the secret to score outstanding marks in your board examination.

“Life is a dream for the wise, a game for the fool, a comedy for the rich, a tragedy
for the poor.” ……….Sholom Aleichem

The story describes the story of a polish girl named Wanda Petronski, whose family had shifted to America. Therefore, she had to attend the school with American children, who used to make fun of her name as they find it to be quite strange and weirdest in the classroom.

Due to lower economical status, she used to wear a faded blue dress all day to school. And basically, this was the problem behind she getting mocked, as in spite of belonging to a poor family, she claimed to be having 100 dresses. The main mischievous ones, who used to tease her were two friends— Peggy and
Maddie.

So in order to tease Wanda, they used to wait for Wanda before school, even on the price of getting late for their classes. As Maddie herself belonged to a poor family, she herself didn’t wanted to tease Wanda anymore; and even wanted to ask Peggy too for the same.

But due to the fear that it may break their friendship, she could never utter a word regarding this. As the story proceeds, it lights up the fact that Peggy was never intended to hurt Wanda, instead, she wanted to know that why Wanda lies about the hundred dresses.

However, the end of the story brings out the emotional secret of ‘the hundred dresses’ of Wanda Petronski. As on the result declaration day of the drawing competition, their classroom was filled with a hundred drawings of hundred exceptionally beautiful dresses. Those dresses were actually drawn by Wanda. And those drawings not only won the competition, but they also made Peggy and Maddie realize their mistake of treating Wanda so badly.

Q1. Where in the classroom does Wanda sit and why?

Answer: Wanda used to sit in that corner of the classroom where the rowdy
boys sat, the boys who got the lowest marks and had the loudest laughter.
The exact reason behind her sitting in that corner was unknown, but there
were guesses that it was because of her dirty shoes.

Q2. Where does Wanda live? What kind of a place do you think it is?
Answer: Wanda lived in Boggins Heights. As per the description given in
the chapter, it was the area where poor people lived, and the place was full
of mud.
Q3. When and why do Peggy and Maddie notice Wanda’s absence?

Answer: As from the past two days, Wanda wasn’t coming to the school, so on
the third day i.e., on Wednesday, Peggy and Maddie were waiting outside the
school to tease her, but even after a very long time, she didn’t come. This
made them late for school. Then only they noticed that Wanda was
missing.
Q4. What do you think “to have fun with her” means?
Answer: “To have fun with her” means to tease her about the hundred
dresses Wanda claimed to have in her closet, which was contrary to her
poor conditions.

Q5. In what way was Wanda different from the other children?
Answer: Along with having the weirdest name in the school, Wanda
Petronski was a quiet and shy girl with no friends. All this differentiated her
from everyone else.
Q6. Did Wanda have a hundred dresses? Why do you think she said she
did?
Answer: No, Wanda did not have a hundred dresses.
As she was a poor girl, she didn’t had the money to buy so many dresses,
but whenever those two girls, Maddie and Peggy used to tease her, she
used to affirm the fact out of rage, as she didn’t wanted to showcase her
poverty.

Q7. Why is Maddie embarrassed by the questions Peggy asks Wanda? Is
she also likes Wanda, or is she different?

Answer: Maddie is embarrassed by the questions that Peggy used to ask
Wanda because she herself was poor to the extent that she had to wear
the clothes of Peggy, so she feared that one day Peggy may treat her too
in the same way.
No, Maddie is not like Wanda, as she had a lot of friends.

Q8. Why didn’t Maddie ask Peggie to stop teasing Wanda? What was she
afraid of?

Answer: Maddie did not ask Peggy to stop teasing Wanda because she too
was poor and thus she wore hands down clothes of Peggy, so she feared
that on doing so, she too may be the next target for Peggy.

Q9. Who did Maddie think would win the drawing contest? Why?

Answer: Maddie thought that Peggie would win the Drawing contest as she
was the best artist in the class.

Q11. How is Wanda seen as different by the other girls? How do they treat
her?

Answer: Other girls saw Wanda as poor and vulnerable girl, who had the
weirdest name in the school, and used to remain quiet even after sitting in
the corner with the rough and noisy boys. Also, she always wore the same
dress, so other girls made fun of her.

Q12. How does Wanda feel about the dress game? Why does she say
that she has a hundred dresses?

Answer: Wanda felt very embarrassed when the other girls played the
dresses game on her. She used to claim that she had a hundred dresses in
order to put those insults and jokes away.

Q13. Why does Maddie stand by and not do anything? How is she different
from Peggy? (Was Peggy’s friendship important to Maddie? Why? Which
lines in the text tell you this?)

Answer: Maddie stands quietly and watches as Peggy asks Wanda
embarrassing questions because she felt that if she stopped Peggy from
doing so, she may become Peggy’s next target.
Maddie is quite different from Peggy as she didn’t tease Wanda while
Peggy did.

Yes, Peggy’s friendship was very important to Maddie as along with being the most popular girl in the school, Peggy was the one who provided her worn out clothes. The lines which indicate this are -“Peggy was the most popular girl in school. She was pretty, she had many pretty clothes and her hair was curly. Maddie was her closest friend.” and,“Suddenly she paused and shuddered.

She pictured herself in the school yard, a new target for Peggy and the girls. Peggy might ask her where she got the dress that she had on, and Maddie would have to say it was one of
Peggy’s old ones that Maddie’s mother had tried to disguise with new trimmings so no one in Room Thirteen would recognize it.”

Q14. What does Miss Mason think of Wanda’s drawings? What do the
children think of them? How do you know?

Answer: Miss Mason thought of Wanda’s drawings to be quite magnificent and attractive. It is evident from the lines where the drawing teacher, Ms. Mason said that judges liked those paintings so much that they thought that any one of them was worthy of winning the competition.

While the children were amazed at the sight of such fascinating paintings, and it is apparent from the line, “The children burst into applause, and even the boys were glad to have a chance to stamp on the floor, put their fingers in their mouths and whistle, though they were not interested in dresses.