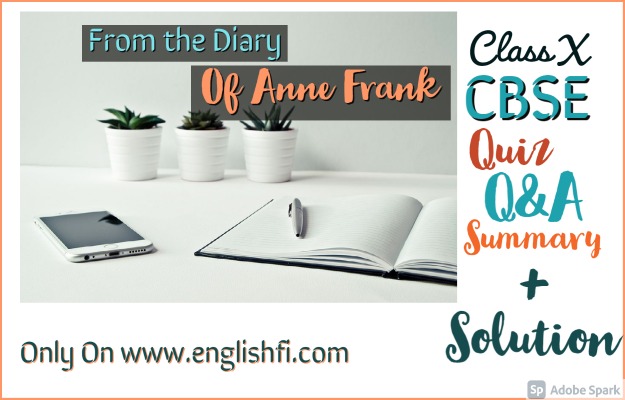 You, exactly landed on right Place!

Today, I will dive in deep to discuss all the important points of the Chapter ‘From the Diary of Anne Frank’ I ensure you will get a complete idea to write the summary and explanation orderly. You will be able to write a good answer. After reading this page you will find the secret to score outstanding marks in your examination.

This extract from ‘The Diary of a Young Girl’ tells us the real-life story of this young girl. She and her family hid from the Nazis for two years in the Secret Annex before they were betrayed and captured. Anne died in the concentration camp shortly after her fifteenth birthday, but her diary survived to tell her story.

Anne Frank was born as Anneliese Marie on 12th June 1929. She was a Jewish girl born in Germany. She wrote the diary when she was hiding with her family and four friends in Amsterdam during the German occupation of the Netherlands in World War II.

When the Nazis gained power in Germany, her family had moved to Amsterdam. As persecutions against the Jewish population increased, the family went into hiding in July 1942 in hidden rooms in her father Otto Frank’s office building. They were betrayed and transported to the concentration camp system after two years in hiding, where Anne died of typhus.

Her father, Otto, the only survivor of the group, returned to Amsterdam after the war ended, to find that her diary had been saved. Convinced that it was a unique record, he took action to have it published in English under the name ‘The Diary of a Young Girl.

The diary was given to Anne Frank for her thirteenth birthday and chronicles the events of her life from 12 June 1942 until its final entry of 1 August 1944. Described as the work of a mature and insightful mind, the diary provides an intimate examination of daily life under Nazi occupation. Anne Frank has become one of the most renowned and discussed of the Holocaust victims.

This chapter is a part of Anne Frank’s diary. Here she tells us about the early days of her life. She says that she decided to start writing a diary because she did not have a friend. She had a sister three years older to her. She lived in Frankfurt until she was four. Her father immigrated to Holland in 1933.

Anne Frank was sent to the Montessori school and stayed there until she was six. When Anne was in the sixth form, her teacher was Mrs. Kuperus, the headmistress. Both had a great love for each other. Anne had no one with whom she could share her secrets. So she decided to make her diary to her friend.

She called it ‘Kitty’. On Saturday 20th June 1942, Anne Frank made her first entry in her diary. It was in the form of a letter and was addressed to her diary ‘Kitty’. Anne writes that one day; Mr. Keesing punished her for talking in the class. He gave her extra homework and asked her to write an essay on ‘A Chatterbox’. Anne wrote it, but she was again caught talking in the class.

It was about a mother duck and the father swan. The father bit the three ducklings to death because they quacked too much. It was a satire on Mr. Keesing. But he took the joke in the right way. He read the poem to Anne’s class and other classes also. He allowed Anne to talk in the class and never again gave her extra homework.

Meanings of Words and Phrases

strange: unusual or surprising; difficult to understand or explain

musings: thoughts or comments on something you have been thinking about carefully and for a long time

patience: the ability to wait, or to continue doing something despite difficulties

depressed: unhappy and without hope

listless: tired and weak, and lacking energy or interest

brooding: to feel sad, worried, or angry for a long time

confide: to tell something secret or personal to someone who you trust

liable: to have responsibility for something or someone

enhance: improve the quality, amount, or strength of something

jot: make a quick short note of something

plunge: jump or dive quickly and energetically into a task

adorable: people or animals that are easy to love because they are so attractive and often small

emigrated: to leave one s own country in order to settle permanently in another

plunked down: to drop or settle into a position

intended: to have as a plan or purpose

solemn: serious and without any humour

dedication: willingness to give a lot of time and energy to something because it is important

quaking in its boots: very frightened, scared, or nervous

staked: to risk something especially of value

pleading: making an emotional or earnest appeal to someone

glances: to take a brief or hurried look

dummies: not real and is used for practice

unpredictable: likely to change suddenly and without reason

fogey: a person who is old-fashioned and likes traditional ways of doing things

tucked: to push a loose end of a piece of clothing or material into a particular place or position, especially to make it tidy or comfortable

ramble: to talk or write in a confused way, often for a long time

convincing: to be able to make you believe that something is true or right

inherited: derived genetically from one s parents or ancestors

incorrigible: a bad behaviour, impossible to change or improve

ingenuity: someone s ability to think of clever new ways of doing something

ridiculous: someone or something foolish or unreasonable and deserving to be laughed at

Theme of the Story

The Holocaust is believed to be one of the most terrible events in human history. During World War II, when Hitler was the leader of Germany, six million Jewish people were murdered by the Nazis. This included as many as 1 million Jewish children. Millions of Polish, Catholics, Serbs, and handicapped were also killed.

It is believed that the Nazis murdered as many as 17 million innocent people. Germany lost World War I and was inflicted with insults from all the countries worldwide. Hitler hated the Jews as he held them responsible for Germany’s defeat in World War I. For him, the Jews were anything but human.

Later, during World War II, the Nazis took over a city in Europe. They would force all of the Jews into one area of town which was called a ghetto. These people had little access to food, water, or medicine. And since multiple families had to share a single room, it was also very crowded. These people were eventually brought to concentration camps. Concentration camps were like prison camps.

People were forced into hard labour. The weak were killed or died of starvation. Some camps even had gas chambers. People would be led into these chambers in large groups only to be killed with poisonous gas. Owing to this, many Jews hid from the Nazis during World War II. Sometimes they would pretend to be a part of another family and sometimes they would hide in secret rooms or in a basement or attic.

Some were able to eventually escape across the border into a free country, but many hid for years sometimes in the same room. There are many stories of Jews striving to survive during the Holocaust and the heroes who helped them. ‘Anne Frank’ had recorded her thoughts in a diary which we know as ‘The Diary of a Young Girl’.

‘From the Diary of Anne Frank’ is only a very small extract from Anne’s diary. Anne Frank’s Diary is basically a novel that begins on her thirteenth birthday and goes up till when she was fifteen years old. Two short months after Anne’s fifteenth birthday, and two days after her last diary entry, the Secret Annex was raided by the Nazis. We don’t know Anne’s thoughts or feelings at that point or any time after, but we know things only got worse.