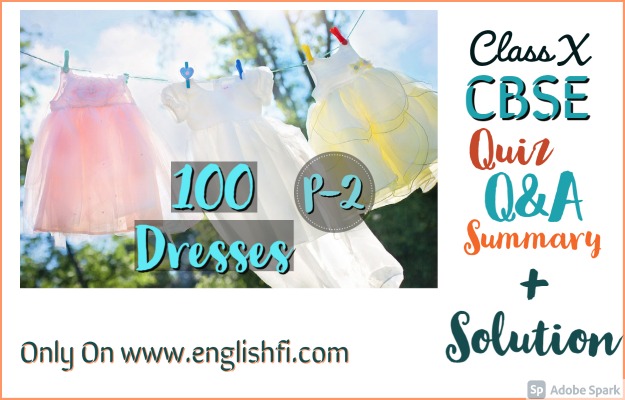 Today, I will dive in deep to discuss all the important points of the Chapter ‘ The Hundred Dresses’ (Part-2). I ensure you will get a complete idea to write the summary and explanation orderly. You will be able to write a good answer. After reading this page you will find the secret to score outstanding marks in your board examination.

“Forgive yourself for not knowing what you didn’t know before you learned it.” …..Maya Angelou

Summary of the Chapter: The Hundred Dresses (Part-2)

The chapter is the continuation of the first part of ‘The Hundred Dresses’. It starts with the scene where all the children of Room number 13 are adoring the hundred drawing sheets of Wanda Petronski, each sheet consists of a differently
designed dress.

But then Miss Mason received a note from Wanda’s father, in which he announced that Wanda and her brother will not attend that school anymore as they were shifting to a big city where nobody would tease them for
their name and nationality.

That letter left Miss Mason in an utter shock, which she conveyed to the class too.
Although it does affect Peggy to some extent, the one who was badly affected by this letter was Maddie. It added to Maddie’s guilt; and at the very moment, she was desperately eager to apologize to Wanda, and convince her to
come back to the school.

So she along with Peggy rushed to Boggins Heights, where Wanda lived, hoping that Wanda hadn’t shifted yet. But to their dismay, there wasn’t anyone in the house. And due to the immense guilt of not stopping Peggy from asking embarrassing questions to Wanda, Maddie decided to always stand against the wrong.

So, she
along with Peggy decided to write a letter to Wanda, apologizing for their wrong behaviour; but they ended up writing a friendly note.

But even after so many weeks, they didn’t get a reply. And one day near Christmas, Miss Mason told the class that she received a letter from Wanda, in which Wanda expressed that she was missing the school, and requested the teacher to give one of her hundred drawings, each to Wanda and Peggy.

Also, she mentioned that had a new lot of hundred dresses were lined up in her house. But as soon as Maddie and Peggy examined the drawing keenly, they found that it
was their faces only, which she had drawn along the dresses. Hence, both the girls concluded that Wanda was never upset with them, and did accept them as her
friends.

Difficult Words and their Meaning

Question and Answer: The Hundred Dresses-Part 2

Answer: The letter sent by Mr. Petronski said that his children namely, Jake and
Wanda are not going to study in that school anymore as along with his whole
family he is shifting to a big city, where nobody would judge him or his family
members by their name.

Q2. Is Miss Mason angry with the class, or is she unhappy and upset?

Answer: Miss Mason is very upset about the fact that Wanda got hurt by her students’ rough behaviour. But in spite of being upset, she didn’t scold anybody, instead, she said that whatever happened must have happened in
thoughtlessness.

Q3. How does Maddie feel after listening to the note from Wanda’s father?

Answer: After listening to the note from Wanda’s father, Maddie got very upset.
She felt very bad for not stopping the girls, who were bullying Wanda. And all she
wanted now is to get the chance to make amend for her mistake.

Q4. What does Maddie want to do?

Answer: Maddie wanted to say sorry to Wanda, and tell her that if anybody teased her in future, she would be there to stand against them.

Q5. What excuses does Peggy think up for her behaviour? Why?

Answer: In order to make herself guilt-free, Peggy said that it she only who inspired Wanda for making such nice drawings. She adds to this that she never teased Wanda for her strange name and for being a polish immigrant, but she
teased her only because Wanda always lied about the number of dresses she had.

Q6. What are Maddie’s thoughts as they go to Boggins Heights?

Answer: As they go to Boggins Heights, Maddie was desperately willing to say sorry to Wanda for her coward behaviour, and to stop her from leaving the school by telling her that her paintings have won the competition.

Answer: Wanda’s house was surrounded by dry grasses, and though everything looked shabby but was quite clean, jus like the faded blue dress of Wanda, which was clean but looked shabby due to lack of ironing.

Q8. What does Maddie think hard about? What important decision does she come to?

Answer: When Maddie learned that the Petronski’s have finally shifted, she felt very guilty. And due to this, she couldn’t sleep that night as she was enrolled into deep thoughts regarding her coward behaviour. So she decided to stand against all the evil, and thus saving the weak from getting bullied or victimized.

Q9. What did the girls write to Wanda?

Answer: The girls, Peggy and Maddie wrote a friendly note to Wanda, telling her about her victory in the drawing competition, and asking her about the new city to which she had moved. They also added that they miss her a lot.

Q10. Did they get a reply? Who was more anxious for a reply, Peggy or Maddie? How do you know?

Answer: No, they didn’t got the reply, however Wanda did sent a letter to Miss Mason, in which she asked her to give one drawing of hers each to Peggy and Maddie. And to this action of hers, both the girls assumed as her approval to their apologies. Out of the two girls, Maddie was more anxious for a reply because she was extremely guilty of her cowardliness. This is clearly visible through that part of the story, where on one side Peggy forgot about this incident, while on the other side, Made used to imagine the scenarios where girls used to tease Wanda, and then
she used to save her from them.

Q11. How did the girls know that Wanda liked them even though they had teased her?

Answer: Few days before the Christmas, Miss Mason received a letter from Wanda conveying her feelings for the class i.e., how much she missed everyone. Also, she requested the teacher to give the drawing of the blue dress and the
green dress to Maddie and Peggy respectively. So the girls assumed that Wanda liked them even after they teased her.

Q12. Why do you think Wanda’s family moved to a different city? Do you think life there was going to be different for their family?

Answer: Wanda’s family moved to a different city because in a big city where many people of strange names lived, which means, the natives of that city. And hence, Wanda and her brother would not bully in the school. Yes, life in the big city would surely be different for the family as the new city was full of people with strange names, so it will be quite comfortable for them.

Q13. Maddie thought her silence was as bad as Peggy’s teasing. Was she right?

Q14. Peggy says, “I never thought she had the sense to know we were making fun of her anyway. I thought she was too dumb. And gee, look how she can draw!” What led Peggy to believe that Wanda was dumb? Did she change her opinion later?

Answer: Wanda’s silence at Peggy’s mocking sessions led Peggy to believe that Wanda was dumb. But when she saw the mesmerizing drawings of Hundred different dresses made by Wanda, her opinion about Wanda changed from a stupid girl to an extremely talented artist.

Q15. What important decision did Maddie make? Why did she have to think hard to do so?

Answer: When Maddie learned that the Petronski’s shifting, she felt extremely bad for not being able to say sorry to Wanda. This guilt made her take an important decision of always supporting the right people by standing against the wrong.

Q16. Why do you think Wanda gave Maddie and Peggy the drawings of the dresses? Why are they surprised?

Answer: Wanda gave the drawings of the dresses to Maddie and Peggy because she had drawn their faces on them, which means she had already decided to give those paintings to them only. The girls are surprised because even after going through so much insult, Wanda never hated them, and instead, she dedicated two of her drawings to them only.

Q17. Do you think Wanda really thought the girls were teasing her? Why or Why not?

Answer: Yes, Wanda knew that the girls were teasing her because her father mentioned it in the letter to Miss Mason. So it is quite logical that without her telling her father regarding the teasing at school, how could he mention it.