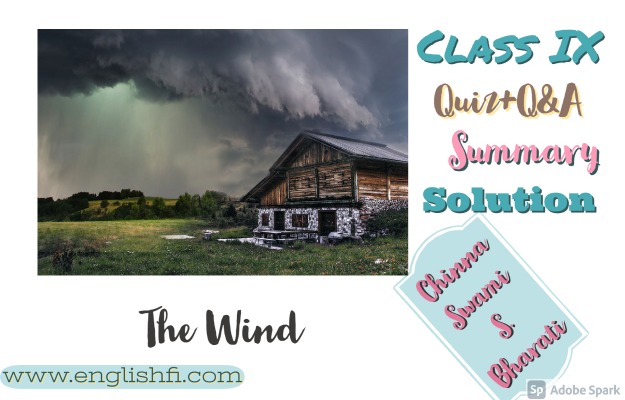 Today, I will deep down to discuss all the important points of “ Wind” composed by prolific Tamil writer Chinnaswami S. Bharati. I ensure you will get the complete idea to write the summary, central idea and explanation of the poem orderly. You will be able to write the specification and figure of speech used in this poem too. After reading this page you will find the secret to score outstanding marks in your examination. I am organizing the content in the following manner.

Popularly known as “Mahakavi Bharthi”, he was a pioneer of modern Tamil poetry, and is considered one of the greatest Tamil literary figures of all time .He died on September 12, 1921, Madras (now Chennai) due to severe injuries.

About The Poem: The Wind

This poem is basically the personification of wind . It describes its destructive form in certain situations, where only strong could survive and weak experience severe damages . The poet conveys the message of befriending adversities (difficulties) in our life , just like wind.

Explanation with Reference to The Context

Don’t break the shutters of the windows.

Don’t throw down the books on the shelf.

There, look what you did — you threw them all down.

You tore the pages of the books.

Reference: These lines have been taken from the poem ‘Wind’, written by C.S.Bharthi. ( Use the same reference for other stanzas)

Context: In these lines, wind is personified and poet requests the wind to be slower

The poet is talking to the wind. He asks the wind to come softly. So, he’s saying that the wind shouldn’t be very strong, loud. It should be soft and sensitive.

Then he says that the wind is very powerful, it lays destruction, it breaks the window screens and scatters the papers. When the wind is powerful, all the books on the shelf fall down.

Then he asks the wind to look at the destruction it had caused. The poet expresses his concern over the wind’s action. It doesn’t listen to his requests, and throws the books down and tears the pages from them.

The poet wonders about the power of the wind to bring rain again and again. At the same time, he concludes that the force of nature plays the worse games with the weaklings of the earth.

the wind god winnows and crushes them all.

Context: The poet says that the wind does not listen to weak people, and it mocks their helplessness

The poet says that the wind does not listen to weak people, and it mocks their helplessness. Here the word ‘crumbling’ is repeated so many times to stress that wind destroys everything.The poet describes the frail nature of human existence and their possessions as weak.

Their bodies are weak and their lives are also weak. He says that the hearts of human beings are not strong. So, the wind which is a strong force plays with all that is weak and crushes them.

He won’t do what you tell him.

Practise to firm the body.

Do this, and the wind will be friends with us.

Context::  These lines presents the poet’s strategy to befriend the wind.

These lines presents the poet’s strategy to befriend the wind. He says that it will not listen to people who are weak and helpless. So, he asks the people to become strong.

He urges them to, build strong houses and doors; and also, build strong bodies and minds. The poet is confident that the wind will be ready to develop fellowship when people are strong both physically and mentally.

When everything seems to be going against you, remember that the airplane takes off against the wind, not with it.

The wind blows out weak fires.

His friendship is good.

We praise him every day.

Context: This is concluding lines of the poem, emphasizes the strong loving behaviour of the wind.

The concluding lines of the poem, emphasises the strong loving behaviour of the wind. According to the poet, as the wind blows off the weak fire, and boosts up the tendency of a strong fire, it similarly supports the strong ones in the journey of its life.

Through this, the poet conveys the message to become strong and befriend all the difficulties of our life as to improve our past to make a wonderful , glorious, and delightful future.

You can’t change your situation, the only thing you can change is how to deal with it.

Summary of ‘The Wind’

The poet conveys the message to stand strong against our oppressors. Through the character of the wind god, he reveals the truth that the strong and powerful people can only survive in the era of socio-political and economical society where, the people like wind god only allow the strong people to survive, and digs-up the roots of weak ones.

So, we should befriend our difficulties, to allow them to improve our weak personality and turn us stronger.

The poem underlines the fact that those who are strong often make fun of weak creatures by destroying them all while making the strong even stronger by uplifting their tendencies.

The fact is displayed through nature and its forces. Thus the poet asks the weak ones to become both physically and mentally strong to cope up with the difficulties of life.

The theme of the story is the importance of becoming stronger by befriending our difficulties.

Specification and Figure of Speech

1. What are the things the wind does in the first stanza?

A. When the wind blows angrily, it destroys all the objects. It breaks the shutters of windows, scatters the papers, throws the books down from the shelves, tears their pages and brings along a lot of rain.

2. What does the poet say the wind god winnows?

3. What should we do to make friends with the wind?

A. We must make ourselves strong to face the violent wind. When we will be strong, the wind will not harm us, instead, it will become a friend and help us to grow and flourish.

4. What do the last four lines of the poem mean to you?

A. The last four lines of the poem carry an important message that strong people emerge stronger and victorious in the face of adversities. We must make ourselves strong like a burning fire which grows and flourishes in the violent wind, we also prosper in the face of challenges.

#1. When the wind does not listen to us should

#3. What sort of houses does the poet ask us to make?

#4. The poet request the wind to blow

#7. How does the wind affect strong fire ?

#8. Why does the poet refers to as crumbling hearts?

#9. you brought rain again. Who is you in this line?

#10. How does the wind Affect weak fires?