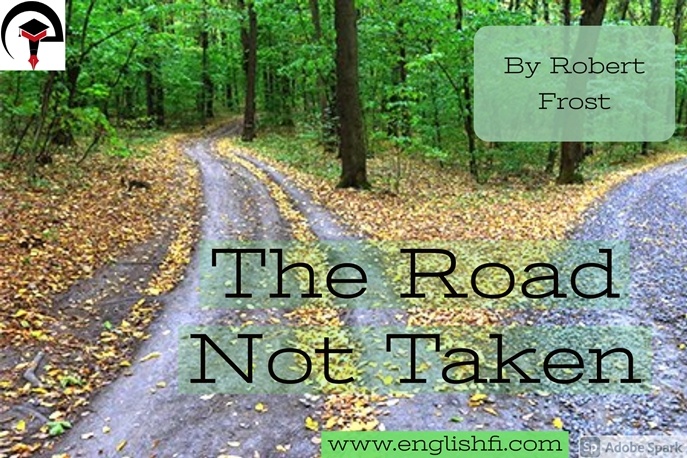 Today, I will be discussing all the important points related to the poem ‘ The Road not Taken” composed by Famous Americal Poet Robert Frost. I ensure you will get a complete idea to write the summary, central idea and explanation of the poem orderly.

You will be able to write the specification and figure of speech used in this poem too. After reading this page you will find the secret to score outstanding marks in the board examination. The content is organised in the following manner.

About The Poet: Robert Frost

Robert Lee Frost was born in San Francisco , California in 1874. He is considered one of the greatest poets of the 20th century and has been widely acclaimed for his realistic depictions of rural life.

During his lifetime, Frost received quite 40 honorary degrees, and in 1924, he was awarded his first of 4 Pulitzer Prizes, for his book New Hampshire. He would subsequently win Pulitzers for Collected Poems (1931), A Further Range (1937) and A Witness Tree (1943).

He died in 1963 after affected by prostatic adenocarcinoma

About The Poem: The Road Not Taken

We all have to make certain choices in life and take risk without knowing the outcome. The poem, “The Road Not Taken” stresses on the importance of choices we make in our life. It begins with a simple choice the poet has to make that could affect his later life greatly.

Central Idea: The Road Not Taken

There are many people as successful as the other but not all of them has the same success story because of the difference in the choices that they made. But why each of them is highly appreciated ? Why there is no way that could promise success or failure?

The poet tries to underline the human nature who often blame the path they chose rather than their own efforts and think about possibilities and ‘what should be done’ instead of thinking about ‘what could have possibly be done.’ Whatever path you choose you could not change the fact that first you have to walk through it , in order to reach your goal.

Stanza-wise Explanation with reference and Context

And sorry I could not travel both

And be one traveller, long I stood

And looked down one as far as I could

To where it bent in the undergrowth;

undergrowth: dense growth of plants and bushes means the forest)

Reference:  These lines have been taken from the poem, “The Road Not Taken” written by Robert Frost. (For other stanzas, Reference will be the same)

Context: The poet Robert Frost unravels the intricacies of life where we are often put into (doubt) dilemma of choosing one thing over another as we could not enjoy both

The stanza reflects the dilemma every human faces, not once but multiple times in life; the dilemma of choice. We as people go through many circumstances and experiences in our lives, and often times, we are disappointed that we could not experience the consequences of every opportunity presented before us.

In order to gain something in life, we have to let something go. In this poem, Frost is emphasizing that we all try our best to guess what lays ahead for us in every opportunity that we are presented which is an attempt to find some control and later comfort over our final decisions.

We like to take our time in order to make informed decisions so we can justify our choices when the regret of missing out on the other “roads” begins to haunt us.

“Then took the other, as just as fair

And having perhaps the better claim

Because it was grassy and wanted wear,

Though as for that passing there

Had worn them really about the same,

fair: As good as the other one,

wanted wear: had not been used

He further says that he may feel that the path is better for him so he chooses it. The gross on which the poet was walking seemed less used. Not many people had walked on this path earlier that is why this path was grassy.

‘And wanted wear’ means that it was not walked over by many people. when he covered some distance, he realized that both paths had been worm out the same way. Both the paths were similar and worn out.

Even in our life, we take any path or option but all of them have the same benefits, disadvantages, problems, challenges and we must face them. We think that we are choosing a better option, but it is not that way.

“And both that morning equally lay

In leaves no step had trodden black.

Oh, I kept the first for another day!

Yet knowing how way leads onto way

I doubted if I should ever come back.”

Sometimes in life, when we reach a fork, we are able to make quick decisions based on what we learn from other people’s experiences. These experiences then leaves the marks on the choices we have, these marks then make us biased to choose a certain path.

When we encounter choices in our lives where we find the leaves are not “trodden black”, it becomes harder for us to make decisions based on our own beliefs and insights just like the situation of the speaker of the poem.

After making the decision, he exclaims that he will leave the first choice for another day, but he also realises that if he let this road go now, there’s no coming back.

There are many defining decisions in a person’s life that shapes their future and they change the course of their life such that there’s no turning back. That is where our regret of not exploring the other options disturbs us.

If you are not willing to risk the unusual , you will have to settle for the ordinary.

“I shall be telling this with a sigh

Two roads diverged in a wood, and I,

I took the one less travelled by,

And that has made all the difference.”

hence: here, in the future

In this stanza, the character is already imagining the regret he will feel, and decides he will not be honest when he would retell the story of his decision, as it will not validate his selection of road if he showcases his regret by stating that an equal opportunity could have landed him elsewhere in life.

Hence he decides, he will tell people he chose the road that was “less travelled by” to come across as a person who took a chance and succeeded in life.

You never know where life will take you, so instead of assuming what the end of the road looks like and building regret is unfruitful especially if you haven’t started the journey in the first place. Life is about the path you choose to walk through, and not about the road not taken.

Those who follow the crowd , often get lost in it.

Summary of the Poem

The poem, “ The Road Not Taken “ briefly talks about that phase of life. Life could not continue without choosing one way over the other simply because neither you could travel both of them simultaneously nor you could come back to that time to choose another way. Because life goes on and one way leads to another and there is no turning back.

But even after making a decision, the other option seems alluring and we get disappointed as we could not go back to the time and we drown ourselves in the thoughts about possibilities, the other way could have landed us in.

Theme Of The Poem

The theme of the poem is the importance of the decisions and choices we make in life.

Figure of Speech and Specification

Extended Metaphor ( The poet thoroughly explains the idea of making decisions in one’s life while taking the two roads as the multiple choices that we come across in our lives.

Symbolism: two roads which represents two or more choices in our human life

Anaphora: ‘and’ repeated at the beginning of lines 2, 3 and 4

Repetition: ‘Ages’ is repeated. ‘Two roads diverged in a wood’- this sentence is repeated in stanzas 1 and 4.

1. Discuss what these phrases mean to you.

(i) a yellow wood

A. ‘Yellowwood’ refers to the forest which has withering(faded, unfresh) leaves as in the season of autumn. It represents a world full of aging people.

(ii) it was grassy and wanted wear

A. It means that the path had a lot of green grass on it. This means that it had not been walked(troden) over by many people. It had to be worn out by the steps of the people who walked on it.

(iii) the passing there

A. It means that when he walked over the path that he had chosen.

A. It means that no one had walked over the leaves as they were still green. If they had been walked over, they would have turned black.

(v) How way leads on to way

A. It means that as we walk on a path, we come across more options and make choices further. We keep on walking ahead on that way.

3. Is there any difference between the two roads as the poet describes them

(i) in stanzas two and three?

A. The two paths were similar. In the beginning, the poet felt that one of them was grassy and had not been walked over by many people, but when he walked on it for some distance, he realized that it was like the other road.

Where does the traveller find himself? What problem does he face?

A. The traveller finds himself standing on a fork in the path. He is in a problem as he must choose one path and is unable to decide which one to choose.

(ii) in the last two lines of the poem?

A. Here, again the poet talks of his initial decision when he thought that the roads were different and chose the one that had been walked over by a lesser number of people.

#1. The poet doubts on his return because

#2. 'The Road not Taken' in the poem Symbolises

#3. In the last stanza, the poet felt sorry because

#4. The Leaves colour did not chage and turned black becase

#5. The poet wanted to travel on both roads because

#6. The poet's decision to take the second road, symbolises -

#8. In the yellow wood the poet saw

#9. It may be guess that the poet is stood at the intersection of

#10. When the poet looks two roads diverging in the forest decides to take the