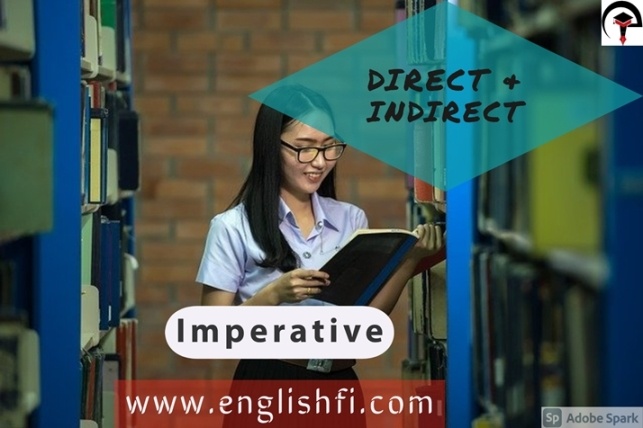 In Imperative sentences, we change the Reporting Verb according to the sense of the sentence of Reported Speech.

If there is a sense of Order we change Reporting Verb [Said To] into Ordered.

Example:- My teacher said to me,”Bring your copy.”

My teacher ordered me to bring my copy.

If there is a sense of Advice we change Reporting Verb [Said To] into Advised.

Example:- She said to Reena,”Work hard.”

She advised Reena to work hard.

Example:- The boy said to me,”Please help me.”

The boy requested me to help him.”

In Imperative Sentence we use TO as conjunction.We write the verb of reported speech after conjunction and make the verb Infinitive.

Example:- He said to me,”Please give me water.”

He requested me to give him water.

After it we change Tenses, Pronouns, Nearness of time or position according to the rules.[link of basic rules.]

In Negative Sentences, we change Reporting Verb [Said To] into Forbade and then use conjunction TO before the verb of reported speech.

Example:- My father said to me,”Do not waste your time.”

My father forbade me to waste my time.

In other conditions we change reported speech [Said To] according to the sense into Requested,Ordered,Advised etc then we use Not to before the verb of reported speech.

Example:- The teacher said to him,”Do not write here.”

The teacher ordered him not to write there.

We do not use Forbade in Never type sentences.

Example:- The teacher said to the students,”Never tell a lie.”

The teacher ordered the students never to tell a lie.”

How to change Let Us type sentences into Indirect Speech.

We change Reporting Verb [said to] into Suggested to.

We use conjunction That.

Example:- He said to me,”Let us play cricket.”

He suggested to me that we should play cricket.

We change Let Us into They or We according to the reporting clause.

If in the reporting clause there is First Person either as Subject or Object we change Us into We.

If the Subject and Object of the reporting clause both are Third Person we change Us into They.

After changing Let Us into We or They, we write Should+Verb+Object……and we change Nearness of Time or Position according to the rules.[link of basic rule]