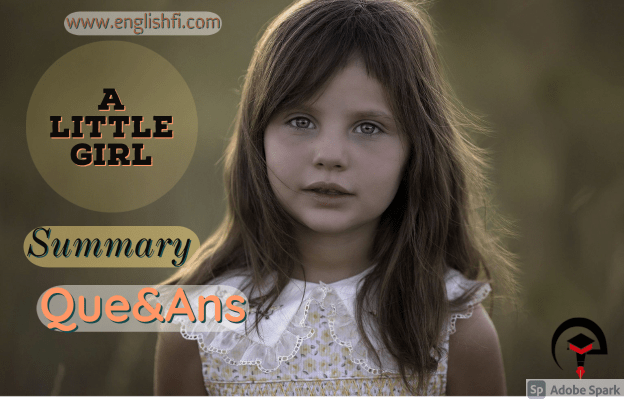 Today, I will dive in deep to discuss all the important points of the Chapter ‘ The Little Girl’ written by Katherine Mansfield. I ensure you will get a complete idea to write the summary and explanation orderly. You will be able to write a good answer. After reading this page you will find the secret to score outstanding marks in your examination.

This story highlights a painful and fearful experience of a little girl whose father is too busy in his work that he never finds time to have fun with her, as her neighbour Mr. MacDonald had have with his children. In this story, the little girl, Kezia had spent most of her time with her grandmother, and as a result, she hesitates and couldn’t find confidence even to speak to her father.

As often seen in the cases of those who work for a longer period of time than usual, Kezia’s father too had work stress; and as a result, he punished her very hard for a very innocent act. Further, she saw Mr. MacDonald to spend his time, enjoying with his children, and playing with them, instead of punishing them for their mischievous acts.

Both these incidents gave her one more reason to hate her father. But her hatred turned into immense love one day when she was alone at home with the cook and her father, and she woke of a nightmare, and to her immense surprise, she found her father who took her into his room in his arm and slept there placing her head over his chest. This act of her father changed her way of thinking.

Summary in Hindi: The Little Girl

This story brings out the fact that every parent loves their child, but the conversation gap is something that can create a big void. But this void too can be filled with love.

Question 1: Why was Kezia afraid of her father?

Answer: Kezia’s father’s work stress was what had caused a conversation gap between him and Kezia; and she had spent most of her life with her grandmother only. This all gave birth to the fear in her.

Question 2: Who were the people in Kezia’s family?

Answer: Apart from Kezia and her father, there was Kezia’s mother and her grandmother.

Answer: (i) Before going to office the father used to give a casual kiss and asked her to say goodbye.
(ii) After coming back from office he would ask for newspaper and a cup of tea.
(iii) On Sundays he would sleep on the sofa with his face covered with his favourite cushion.

Question 4: In what ways did Kezia’s grandmother encourage her to get to know her father better?

Answer: Kezia’s grandmother used to encourage Kezia to serve tea, to fetch spectacles for her father, and to give gift to him on his birthday, so that she could get opportunity to interact with him.

Question 5: Kezia’s efforts to please her father resulted in displeasing him very much. How did this happen?

Answer: Kezia’s grandmother asked her to make a pin cushion of Yellow silk for her father. Kezia wanted to stuff the cushion with some scraps. While searching for scrap, she found some pieces of papers spread on her mother’s bed. In her innocence, she used them to stuff the pin cushion.

But it was her sheer bad luck that those were not useless papers, but was an important speech written by her father for a very important event. This made her father angry to the extent that he beat her up.

Question 7: Kezia decides that there are “different kinds of fathers”. What kind of father was Mr Macdonald, and how was he different from Kezia’s father?

Answer: Mr. Macdonald was of jovial nature. He used to play around with his kids. On the other hand Kezia’s father was never seen in a playful mood and was always serious. He always scolded Kezia for seemingly minor mistakes. This was his way of bringing up a child.

Question 8: How does Kezia begin to see her father as a human being who needs her sympathy?

Answer: When Kezia’s mother falls sick she is feeling lonely. To take solace she goes to sleep in her father’s lap. While consoling her he seems to be an affectionate person. Kezia also feels the warmth of the proverbial bear hug of her father. Now she feels quite safe and secure with her father. She realizes that because of his busy schedule her father is unable to give enough time to the family. When her father falls asleep before her, she realizes that her father is also a human being and he too needs sympathy.