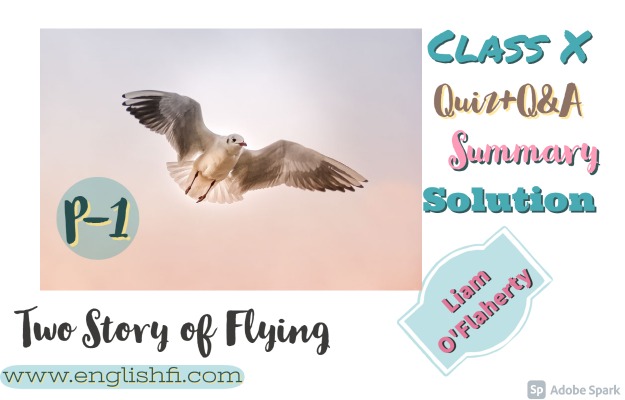 Introduction: The story, ‘His First Flight’ is about a young seagull who is much afraid to attempt his first flight.

About the author: Liam O’Flaherty was born on August 28, 1896, in Ireland. He was a writer of extraordinary storytelling ability and powers of observation. He was considered to be a leading figure of the Irish Renaissance. He published his first novel, ‘Thy Neighbour’s Wife’, in 1923.

A collection of short stories in Irish, written over three decades, was published in 1953. His major works include The Black Soul; The Assassin; Skerrett and Famine.

There were six members in the seagull family -mother, father, three sons, and one daughter. All of them except the youngest son are experts in flying high. His parents have tried several times to teach him how to fly but he is scared to do that and does not want to try anymore.

He relies on the food brought back by his parents from their flights. He thinks that his wings would not support him and he would fall down in the sea below and drown. Even his parents have rebuked him. They even threatened him if he doesn’t fly, he would die of hunger but he does not try.

After many failed attempts his parents leave him alone on the rock without food. They even taunt him for his cowardice. The young seagull looks at his brothers and sister enjoying swimming, diving in the seawater for fish to feed themselves, but no one comes near him to offer food.

As time passes, the young seagull could not bear the hunger and the heat. He moves closer to the edge of the cliff and pretends to fall asleep but no one in his family takes notice of him. As his brothers and sister have already had a hearty breakfast and the father seems busy preening the feathers on his back.

The mother looks at him and tries to tempt him with pieces of fish. Eventually, he dives for food. When he begins to fall down with a scream, he attempts to save himself from drowning, he tries to spread his wings outwards and begins flying. He feels a little dizzy but his fear gradually vanished. He soars slowly, downwards and upwards. Now he could finally fly on his own.

ledge – a piece of rock on the side of a cliff or mountain, which is in the shape of a narrow shelf

expanse – a large, open area of land, water, or sky

shrilly – a high-pitched and piercing voice or sound

skim – move quickly just above a surface without touching it

upbraiding – to criticize or scold severely

herring – a long, silver-coloured fish that swims in large groups in the sea

cackle – a sharp broken noise or cry characteristic of a hen

cliff – a high area of land with a very steep side, especially next to the sea

taunting – to intentionally annoy and upset someone by making unkind remarks

thrust – push suddenly or violently in a specified direction

derisively – a verbal abuse, used to ridicule or mock someone

plaintively – to do something in a sad or mournful way

uttered – to say something or to make a sound

seized – take hold of something quickly, firmly, and forcefully

headlong – to move at a great speed with head-first

dizzy – to make someone feel unsteady, confused, or amazed

soared – to rise or fly high in the air

swooped – to move rapidly downwards through the air

curvetting – a bird’s action of performing a series of jumps

commended – praise someone or something

ridges – a long, narrow raised part of a surface, especially a high edge along a mountain

amusedly – to show that you think something is funny

beckoning – a movement that tells someone to come nearer

The young seagull is the main character or the protagonist of the story. He comes across as a scared little bird. It is extremely afraid to make his first flight. Although, the siblings flew away by imitating the parents, the young seagull stays back on the ledge. It remains hungry for about twenty four hours. Not even scolding and threatening helps it to make the flight. Only when the mother seagull approaches with food in the mouth, it dives forward unknowingly to catch the fish. It falls off the ledge and thus learns to fly. So, we see that the young seagull is stubborn as it does not listen to repeated requests from its parents. It is also comfort loving because it does no work in getting food. When its mother refuses to provide it food young seagull learns flying for the sake of hunger.

In the story, she is portrayed as a tough but motivating character. Initially, she tried threatening the young seagull in many ways but to no avail. She realizes that only the need to fly would make the little one do so. She approaches him with a piece of fish in her mouth. But, she stops just beyond his reach. In his eagerness for getting the food, the young bird started diving. The mother rose a little higher and the little seagull falls down when trying to dive. Thus, the mother motivated the young one to do what was expected of him, even if it meant that the latter had to fall down a few times.

Theme of the story

In the story, ‘His First Flight’ the author drives home the message that it is only fear that one must fear. The story very well uses the proverb, ‘Give a man a fish and you feed him for a day; teach a man to fish and you feed him for a lifetime’. The young seagull was so scared that he didn’t even make an attempt to fly until he understood the need for it. The parents of the seagull had tried to cajole and threaten him in different ways, but to no avail. The mother knew well that the trick was to arouse his need and she eventually lures him out with food – to his momentary horror and then great joy. Thus, we see, the story highlights the importance of independence, self-belief and confidence, and the need for motivation to attain goals. The story also shows how motivation can be imparted tactfully.

Introduction: The story, ‘The Black Aeroplane’ is about a pilot who is lost in storm clouds.

About the Author: Born on August 25, 1938, Frederick Forsyth is a British author of best-selling thriller novels. His best-known works are, ‘The Day of The Jackal’, ‘The Odessa File’, ‘The Dogs of War’, ‘The Devil s Alternative’, ‘The Fourth Protocol’, ‘The Negotiator’, ‘The Deceiver’, ‘The Fist of God’, ‘Icon’, ‘Avenger’, ‘The Afghan’, ‘The Cobra’ and, ‘The Kill List.

The story “Black Aeroplane” is about a pilot who feels happy and contended to fly over a city at night time. He is flying from Paris to London. While taking his flight, he dreams about the long holiday with his family.

He also fantasizes about the scrumptious breakfast he would have upon landing. As soon as he crosses Paris, he gets a look at the dark clouds that were a sign of the upcoming storm.

The right decision would have been to turn back to Paris for the sake of safety. But he is overshadowed by his dreams and not wanting to delay them, risks the life of his passengers, and heads straight into the storm.

Everything gets dark, he is unable to see, all his direction instruments stopped functioning and he lost control of the plane. When all hope was lost, he saw another plane whose pilot was more than willing to rescue them.

The author was panicking as there was very little amount of fuel left. The anonymous pilot guided them out of the storm and disappeared as soon as they saw light. Upon landing, when he asks the lady in the control room about the other pilot, he is left in shock when she says that it was the only plane in the sky.

compass: an instrument containing a magnetized pointer which shows the direction of magnetic north and bearings from it

twisted: to turn something repeatedly

glad: a feeling of pleasure or happiness

runway: a strip of hard ground along which an aircraft take off and land

radar: a system for detecting the presence, direction, distance, and speed of aircraft, ships, and other objects, by sending out pulses of radio waves which are reflected off the object back to the source

Theme of the Story

Frederick Forsyth’s ‘The Black Aeroplane’ is a mystery story. As the pilot was flying towards his home in England, he was surrounded by storm clouds. As his plane moved inside the dark clouds, his compass stopped working and he was not able to see anything.

Even his radio stopped working and he was not able to contact ground control. But all of a sudden, he saw another plane flying next to him and the pilot gesturing to him to follow. The pilot gladly followed and soon was guided to safety. But as mysteriously as it had arrived, the plane disappeared.

So much so that even the ground control told him that there was only his airplane up in the sky. The pilot was not able to locate it and it remained a mystery.