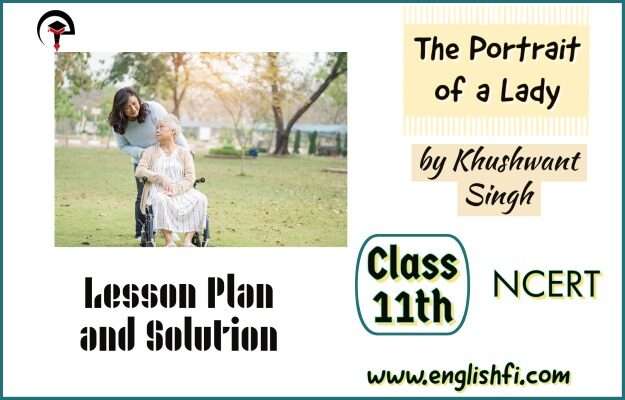 Start with a joke or fun

Rima: Mom, why are you ironing this dress?

Mom: Beta, Iron makes clothes smooth and shiny, so I do…

Rima: O! That’s great! I’ve got an idea, mom. Please give me this iron.

Mom: What! why? What will you do with it?

So, here we are going to learn an interesting story of a child (Author) and his grandma. The writer’s grandmother loves him and tries to inculcate moral and religious values in him. Let’s see what happens later if the writer learns from her grandma or not….

The teacher will ask the students to read the text. He is supposed to do the following things to make the class more learning-oriented and interesting:

My grandmother, like everybody’s grandmother, was an old woman. She had been old and wrinkled (having deep lines on the skin) for the twenty years that I had known her. People said that she had once been young and pretty and had even had a husband, but that was hard to believe. My grandfather’s portrait hung above the mantelpiece (a shelf above a fireplace) in the drawing-room. He wore a big turban and loose-fitting clothes. His long, white beard covered the best part of his chest and he looked at least a hundred years old.

He did not look the sort of person who would have a wife or children. He looked as if he could only have lots and lots of grandchildren. As for my grandmother being young and pretty, the thought was almost revolting ( shocking). She often told us of the games she used to play as a child. That seemed quite absurd (unbelievable)and undignified (improper)on her part and we treated it like the fables (a story that teaches a moral lesson)of the Prophets she used to tell us.

She had always been short and fat and slightly bent. Her face was a criss-cross of wrinkles running from everywhere to
everywhere. No, we were certain she had always been as we had known her. Old, so terribly old that she could not have grown older, and had stayed at the same age for twenty years. She could never have been pretty, but she was always beautiful. She hobbled about the house in spotless white with one hand resting on her waist to balance her stoop and the other telling the beads of her rosary.

Her silver locks were scattered untidily over her pale, puckered face, and her lips constantly moved in inaudible prayer. Yes, she was beautiful. She was like the winter landscape in the mountains, an expanse of pure white serenity breathing peace and contentment.

My grandmother and I were good friends. My parents left me with her when they went to live in the city and we were constantly together. She used to wake me up in the morning and get me ready for school. She said her morning prayer in a monotonous ( a regular, repeated pattern) sing-song while she bathed and dressed me in the hope that I
would listen and get to know it by heart; I listened because I loved her voice but never bothered to learn it.

Then she would fetch (go and get) my wooden slate which she had already washed and plastered with yellow chalk, a tiny earthen ink-pot and a red pen, tie them all in a bundle and hand it to me. After a breakfast of a thick, stale chapatti with a little butter and sugar spread on it, we went to school.

She carried several stale chapattis with her for the village dogs. My grandmother always went to school with me because the school was attached to the temple. The priest taught us the alphabet and the morning prayer. While the children sat in rows on either side of the verandah singing the alphabet or the prayer in a chorus, my grandmother sat inside reading the scriptures. When we had both finished, we would walk back together.

This time the village dogs would meet us at the temple door. They followed us to our home growling (a low noise of dog )and fighting with each other for the chapattis we threw to them.

When my parents were comfortably settled in the city, they sent for us. That was a turning-point in our friendship. Although we shared the same room, my grandmother no longer came to school with me. I used to go to an English school in a motor bus. There were no dogs in the streets and she took to feeding sparrows in the courtyard of our city house.
As the years rolled by we saw less of each other. For some time she continued to wake me up and get me ready for school.
When I came back she would ask me what the teacher had taught me.

I would tell her English words and little things of western science and learning, the law of gravity, Archimedes’ Principle, the world being round, etc. This made her unhappy. She could not help me with my lessons. She did not believe in the things they taught at the English school and was distressed that there was no teaching about God and the scriptures. One day I announced that we were being given music lessons. She was very disturbed.

To her music had lewd (indecent) associations. It was the monopoly (the act of group/company) of harlots and beggars and not meant for gentlefolk. She said nothing but her silence meant disapproval. She rarely talked to me after that.

When I went up to University, I was given a room of my own. The common link of friendship was snapped (broken) My grandmother accepted her seclusion ( isolation,)with resignation. She rarely left her spinning wheel to talk to anyone. From sunrise to sunset she sat by her wheel spinning and reciting prayers.

Only in the afternoon, she relaxed for a while to feed the sparrows. While she sat in the verandah breaking the bread into little bits, hundreds of little birds collected round her creating a veritable bedlam (Nice sound) of chirrupings. Some came and perched (sitting down)on her legs, others on her shoulders. Some even sat on her head. She smiled but never shooed (to let it go away)them away. It used to be the happiest half-hour of the day for her.

When I decided to go abroad for further studies, I was sure my grandmother would be upset. I would be away for five years,  and at her age one could never tell. But my grandmother could. She was not even sentimental(emotional). She came to leave me at the railway station but did not talk or show any emotion. Her lips moved in prayer, her mind was lost in prayer. Her fingers were busy telling the beads of her rosary.

Silently she kissed my forehead, and when I left I cherished moist imprint ( Full of value)as perhaps the last sign of physical contact between us. But that was not so. After five years I came back home and was met by her at the station. She did not look a day older. She still had no time for words, and while she clasped( hold,) me in her arms I could hear her reciting her prayers.

Even on the first day of my arrival, her happiest moments were with her sparrows whom she fed longer and with frivolous rebukes. In the evening a change came over her. She did not pray. She collected the women of the neighbourhood, got an old drum and started to sing. For several hours she thumped (to hit) the sagging skins of the dilapidated drum (Old drum) and sang of the homecoming of warriors. We had to persuade her to stop to avoid overstraining. That was the first time since I had known her that she did not pray.

The next morning she was taken ill. It was a mild fever and the doctor told us that it would go. But my grandmother thought differently. She told us that her end was near. She said that since only a few hours before the close of the last chapter of her life she had omitted to pray, she was not going to waste any more time talking to us. We protested.

But she ignored our protests. She lay peacefully in bed praying and telling her beads. Even before we could suspect, her lips stopped moving and the rosary fell from her lifeless fingers. A peaceful pallor (lack of colour) spread on her face and we knew that she was dead. We lifted her off the bed and, as is customary, laid her on the ground and covered her with a red shroud.

After a few hours of mourning, we left her alone to make arrangements for her funeral. In the evening we went to her room with a crude stretcher to take her to be cremated. The sun was setting and had lit her room and verandah with a blaze of golden light. We stopped half-way in the courtyard. All over the verandah and in her room right up to where she lay dead and stiff wrapped in the red shroud, thousands of sparrows sat scattered on the floor.

There was no chirruping. We felt sorry for the birds and my mother fetched some bread for them. She broke it into little crumbs, the way my grandmother used to, and threw it to them. The sparrows took no notice of the bread. When we carried my grandmother’s corpse off, they flew away quietly. The next morning the sweeper swept the bread crumbs into the dustbin

The teacher is advised to assign the students for the project work in a group pair (maybe individual).

Write short notes about your loving grandfather or mother (if you have). You need to highlight the following points:

A teacher is advised to divide the learners into different houses (Blue, green, yellow, red etc.) Let them participate in the debate on the following topics.

The teacher is advised to motivate the students to write a poem or short story about their childhood.

The teacher is advised to motivate the students to sing a poem about parents in their mother tongue.