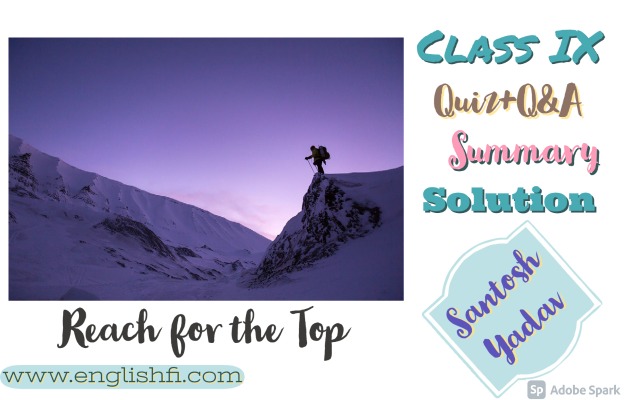 Today, I will be discussing all the important points related to the Reach for the Top. I ensure you will get a complete idea to write the summary, explanation, and question-answer of the lesson. After reading this page you will find the secret to score outstanding marks in the board examination.

‘Reach for The Top’ is a story about two heroic young girls. The first part of the story is about a young Mountaineer Santosh Yadav and the second part is about Maria Sharapova who is a tennis sensation in the world. Santosh Yadav was born in a small village in Haryana state. The opinion of her family was of traditional values and they were adamant to keep their prevailing customs but she rose to the highest glory by her solemn determination and hard efforts. In the same way, Maria Sharapova rose to the top of the tennis world through her hard efforts. She became the number one tennis sensation in the modern world.

Santosh was born in the small village of Joniyawas of Rewari District in Haryana. In our society where the birth of a male child is always preferred over that of a female child, Santosh came as the youngest sister to five brothers.  From the starting days of her life, she lived life on her own terms. She said that she was always determined that if she chose a correct and sensible path, it were the others around her who had to change and definitely not herself.

Although Santosh’s family could afford to send her to the best schools, owing to the family customs, she was given education at the local village school. When she turned sixteen she was pressurized by her family to get married. That is when she threatened her parents that she would never marry if she did not get a proper education. She even left home and enrolled in a school in Delhi. After passing out from high school, Santosh joined Maharani College in Jaipur. There, she got a room in Kasturba Hostel. Santosh recalls that the Kasturba Hostel faced the Aravalli Hills. From her room, she could watch the villagers going up the hill and suddenly vanishing. On checking it out, she found only a few mountaineers and expressed her wish to join them. To her pleasant surprise, they motivated her to learn climbing.

To view the mountains closely, she decided to join the Nehru Institute of Mountaineering in Uttarkashi. As her father refused permission, she decided to skip going home after the exam and joined the institute directly. Thereafter, Santosh went on an expedition every year due to which her climbing skills developed rapidly. Also, she developed a remarkable resistance to the cold and high of the mountain. Equipped with an iron will, physical endurance and an amazing mental toughness, she proved herself repeatedly. It was the year 1992 that is four years after she had requested the Aravalli mountaineers to let her join them, when her hard work and sincerity paid off. At a young age of twenty years, Santosh Yadav scaled Mt Everest. And thus, she became the youngest woman in the world to do so.

With her concern for others and desire to work together with her fellow climbers she found a special place in their hearts too. When it was Everest mission in 1992, Santosh Yadav specially cared for a climber who lay dying at the South Col. Unfortunately she couldn’t save him. However, she saved another climber,  named Mohan Singh. She shared her oxygen with him.

A year after that Santosh became a member of an Indo-Nepalese Women’s Expedition. She scaled the Everest for the second time and set a record by becoming the only woman to have scaled the Everest twice. Having secured a unique place for herself and India in the history of mountaineering, she was awarded with the Padma Shri in recognition of her achievements.

When she was at the top of the world, it took her some time to accept the importance of the moment. But when she unfurled the Indian tricolor and held it on the roof of the world her feelings were indescribable. Apart from being a mountaineer, Santosh is also an environmentalist. She collected 500 kilograms of garbage from the Himalayas and brought it down.

The story “Reach for the Top” is about those people who dare to do something for their goal and such people get success. The theme of the story tells us about Santosh Yadav’s education, her training, and her success as a woman mountaineer in such a country where discrimination against women is rampant. Santosh defied all odds, customs, traditions, and prejudices to script her phenomenal success through her hard work, persistent effort, focus on the goal, and mental and physical toughness. Really Santosh has reached the highest peak that a woman mountaineer could reach, not just once but she reached there twice. She is a wonderful role-model to emulate.

Question.1: Why was the ‘holy man’ who gave Santosh’s mother his blessings surprised?

Answer.1: The holy man Was thinking that like all other families in the villages, Santosh’s family would be wishing for the birth of a son. but when Santosh’s grandmother told him that they wanted to have a daughter, he was surprised.

Answer.2: Where other girls of the village were wearing traditional Indian dresses, Santosh preferred shorts. This shows that even as a young girl Santosh was not ready to accept anything unreasonable.

Question.3: Why was Santosh sent to the local school?

Answer.3: Santosh’s parents were economically eligible to send her to a good school but they sent her to a local school because she was a girl.

Question.4: When did she leave home for Delhi, and why?

Answer.4: At the age of sixteen Santosh left home for Delhi because her parents were pressurizing her to get married according to their tradition.

Question.5: Why did Santosh’s parents agree to pay for her schooling in Delhi? What mental qualities of Santosh are brought into light by this incident?

Answer.5: Santosh’s parents agreed to pay  for her schooling in Delhi because she told them that she thought to work part time to pay her fees. They realized that their daughter was independent, had a strong will-power and firm self-belief. She is able to take her decisions herself and also stand by them.

Question.6: How did Santosh begin to climb mountains?

Answer.6: During her study when Santosh stayed at Kasturba Hostel, she had gone to the Aravallis. There she saw the villagers who crossed the hills and disappeared beyond it. She met them and made them friends. She realised that they were mountaineers. Santosh began to climb mountains when the villagers let her join them and motivated her to climb.

Question.7: What incidents during the Everest expedition show Santosh’s concern for her team-mates?

Answer.7: In the 1992 during Everest expedition, one of her team-mates was in a very critical condition in South Col. Santosh did her best to save him but unfortunately, she could not save the climber. However, she succeeded in saving the life of another fellow-climber called Mohan Singh. Santosh saved him by sharing her oxygen with him.

Question.8: What does show her concern for the environment?

Answer.8: When Santosh reached Himalaya,she collected 500 KG of garbage and brought it down the earth.This shows her concern for the environment.

Question.9: How does she describe her feelings at the summit of Everest?

Answer.9: When Santosh Yadav reached the top of the world, she was overwhelmed with emotions of patriotism and ecstasy. She felt very proud as an Indian when she unfurled the tricolor Indian flag on Mount Everest, the toppest peak of the world and was so happy that she experienced a kind of spiritual bliss. She found it hard to articulate her feelings.

Question.10: Santosh Yadav got into the record books both times she scaled Mt Everest. What were the reasons for this?