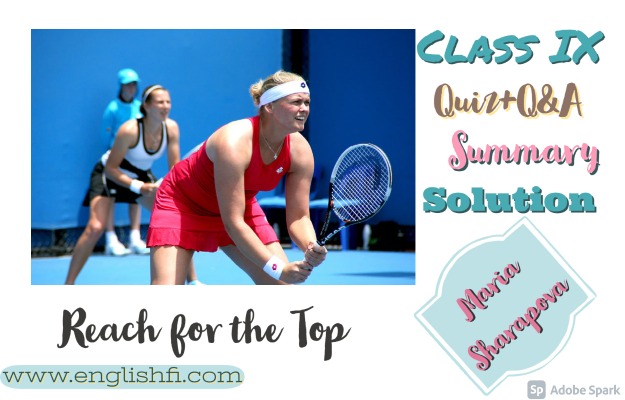 Today, I will be discussing all the important points related to the Reach for the Top. I ensure you will get a complete idea to write the summary, theme, explanation, and question-answer of the lesson. After reading this page you will find the secret to score outstanding marks in the board examination.

‘Reach for The Top’ is a story about two heroic young girls. The first part of the story is about a young Mountaineer Santosh Yadav and the second part is about Maria Sharapova who is a tennis sensation of the world. Santosh Yadav was born in a small village in Haryana state. The opinion of her family was of traditional values and they were adamant to keep their prevailing customs but she rose to the highest glory by her solemn determination and hard efforts. In the same way, Maria Sharapova rose to the top of the tennis world through her hard efforts. She became the number one tennis sensation in the modern world.

On 22nd August 2005, Maria Sharapova lifted herself to the world’s number one position in women’s tennis. She was only a teenager and it took her about four years as a professional to reach the top.

Nine years ago when Maria set foot towards this rapid ascent in a fiercely competitive world, she had to make sacrifices that very few children would be prepared to do. She was barely ten when her father Yuri packed her off to undergo training in the United States. Maria had to stay away from her mother Yelena for two years. Yelena could not accompany her to the United States owing to visa restrictions. Maria recalls that she used to feel very lonely as she missed her mother. Also, her father couldn’t see her much as he was busy working to keep her tennis-training going. Maria also shares with us, instances of when she became a victim of bullying. But Maria was strong enough to not let that depress her. On the contrary, she became all the more determined and tough. The thought of quitting never crossed her mind because she knew her goal. She also says that she was ready to go through much more humiliation and insults than she actually suffered so that she could follow her dreams righteously.  It was the key that unlocked her crown of the women’s singles at Wimbledon in 2004. And it is this very toughness that paved way for her meteoric rise to the world’s number one spot again in 2005.

Maria has touched the hearts of millions of fans with her journey from the frozen plains of Siberia to the pinnacle of women’s tennis. Having left no space for sentiment for herself, Maria’s straight looks and answers make it clear that she considers the sacrifices were worth it. She calls herself extremely competitive. She says that she works hard and that’s her job.

If you have ever heard Maria Sharapova, you must have noticed that she speaks with a pronounced American accent. In spite of that she is proud of being a Russian. Just like any other teenager, Maria’s hobbies are fashion, singing and dancing. She loves to read the novels of Arthur Conan Doyle. She has a fondness for sophisticated evening gowns as well as she loves pancakes with chocolate spread and fizzy orange drinks.

It is her sheer talent, firm desire to succeed and sacrifices that have lifted her to the top of the world. Obviously, people envy the amount of money she has made at a young age. She says money is definitely a motivation for her, given the fact that tennis is a business and a sport. But for her the most important thing is to become number one in the world. And this little dream has helped her achieve much bigger goals in life.

Similarly, the account of Maria Sharapova focuses on the grand achievements of the tennis player, who earned the title of the world number one in women’s tennis in 2005. The author says that one has to pay a price for reaching the top in the form of hard labor, rigorous training, and sacrifice. Sometimes one has to pass through mental torture also on the path to success, but its rewards are always sweet and satisfying.

Question.1: Why did Maria leave Siberia for the U.S.? Why didn’t her mother go with her? How did this separation affect her?

Answer.1: Maria was brought to Florida in the U.S. by her father, Yuri, to get trained as a professional tennis player. Her mother, Yelena, did not go with her due to visa restrictions. This two year separation from her mother was too painful for the young girl. But Maria endured this sacrifice to pursue her dreams and achieve her goal.

Answer.2: Maria’s roommates were much older than her and would return to the room at around 11 p.m. when Maria was already asleep. They woke up to Maria and asked her to clean the room. Maria coped with this trouble by not allowing it to depress her. Instead of being depressed, she strengthened her determination and mental toughness toward her goal.