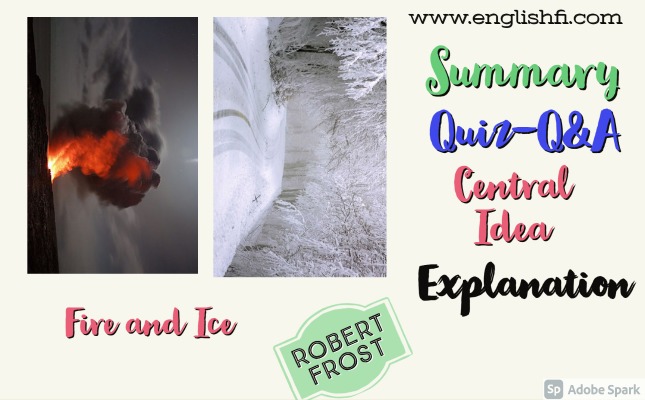 Today, I will be discussing the Poem Fire and Ice By Robert Frost in detail. I ensure you will get a complete idea to write the summary, central idea, and explanation of the poem orderly. You will be able to write the specification and figure of speech used in this poem too. After reading this page you will find the secret to score outstanding marks in the board examination.

Hate, It has caused a lot of problems in this world but has not solved one yet.

The poem is the depiction of the two possible ways of the end of life on earth. The poet has very sharply used the two natural elements— ice and fire, to depict the two elements of human nature— hatred and desire.

He says that some
people think that the world will end by ice due to global warming, while others think that it will end by the volcanic eruption, i.e. by fire; but due to his past experiences, he supports those who believe in the fire factor. But he also agrees that ice too has the ability to replace fire for the purpose of destruction of life.

Basically, he wanted to convey that both desire and hatred are equally lethal for humans as they gradually lead us to destruction.

Note: Hindi version of summary is a machine translation, you are recommended to rely on English version

Central Idea of The Poem: Fire and Ice

The central idea of the poem is that both hatred and desire are very dangerous to human civilization, and they are the only two possible ways through which the world could end.

Difficult Words
Desire-; a strong wish
Favour- liking or approval
Perish- to die or be destroyed
Suffice- to be enough

1)There are many ideas about how the world will ‘end’. Do you think the world will end someday? Have you ever thought about what would happen if the sun got so hot that it ‘burst’, or grew colder and colder?

Answer: As the saying goes that everything in the universe has to end one day, so the world too will have to face its end. And if the case arises that the sun gets so hot one day that it bursts out, there is no doubt that not only our dear earth, but each and every planet of our galaxy will surely experience severe effects.

Especially our earth will lose all the possibilities of life on it due to heavy blasts of fire everywhere. But if the sun grew colder and colder due to some reasons, it will lead us to silent death where everything will freeze to such an extent that very soon the world will turn into nothing, but ice.

3) What is the rhyme scheme of the poem? How does it help in bringing out the contrasting ideas in the poem?

Answer: The rhyme scheme of the poem is “aba abc bcb”. The poet has very magnificently used rhyming to highlight the two different contrasting ideas regarding the end of the world.

On one side he says that people think that the world will meet a disastrous end due to extreme fire or ice, while on the other hand, he brings out two human emotions— icy hatred and heating desires as the disastrous elements.

He magnifies that as the fire could burn out everything, and ice could freeze all, the hatred and desires too could end everything by making everyone fight against each other.

Stanza 1
Some say the world will end in fire
Some say in ice.
From what I’ve tasted of desire
I hold with those who favour fire.

Through these lines, poet says that there are two types of people, one who believe that the world would end by the fire, while the other type consider the ice as the most disastrous element. However, the poet feels that the fire is more
disastrous as it is associated with the desires, which ultimately are the reason behind the various clashes in the world.

But if it had to perish twice,
I think I know enough of hate
To say that for destruction ice
Is also great
And would suffice.

In these lines, the poet says that although the fire is very dangerous, ice certainly is no less than it. He says that along with fire of desires, icy hatred is equally capable of destroying the world.

He says that if the world could be destroyed
twice, ice too is a brilliant option as it too can cause slow death. Thus ice and fire both are capable of calling an end of the world in their either forms i.e., either in their natural form or in their emotional form.