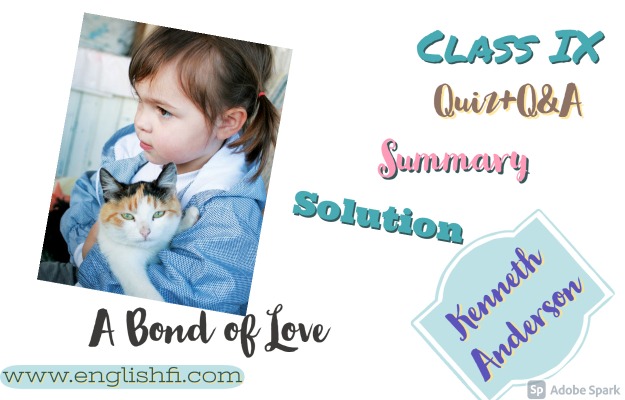 Today, I will be discussing all the important points related to ‘Bond of Love by Kenneth Anderson’. I ensure you will get a complete idea to write the summary, analysis, and question-answer of the lesson orderly. After reading this page you will find the secret to score outstanding marks in the board examination.

Summary and Analysis of ‘Bond of Love’

The story lights up the centuries-long emotional bond between humans and animals. The story starts with an incident where the narrator was on a mission to shoo away the wild pigs, and there one of his friends ends up killing a mother bear

But, very soon he comes face to face with the baby bear which was initially hanging on his mother’s back. Due to his kindness , the narrator decides to keep him, and so presents it to his wife. Here, the narrator’s wife shares the similar bond with that baby bear. As the story continues, the bear grows up to the size of narrator’s Alsatian dogs, and soon oversize them.

Meanwhile, he ate a poisonous substance called Barium Carbonate, which made his legs paralysed; but in an another accident, when he drank a gallon of old engine oil which the narrator had kept to fight a termite attack.  Very soon, due to his greater size, narrator send him to the zoo.

But gradually through the letters of zookeeper, and her relatives, narrator’s wife comes to know that the bear’s health is continuously deteriorating, so she decides to meet him. As the bear and she sees each other, they starts weeping. By the time of her departure, she was very sure that anyhow she needs to take him back. So, she requests the zookeeper in this regards, but he asks her to take permission from the Superintendent. As soon as she got the permission, she took him away back to home.

Answer the following questions in 30 to 40 words each.

Q1. On two occasions Bruno ate/drank something that should not be eaten/ drunk. What happened to him on these occasions?

Answer :In the first incident, Bruno ate the poisonous Barium carbonate which was kept to kill rats. As a result, he had to suffer a paralytic attack. It took the vet to inject the medicine twice to revive him.

In the second incident, Bruno drank the old engine oil which the narrator had kept to fight a termite attack. But fortunately it didn’t affected his health.

Q2. Was Bruno a loving and playful pet? Why, then, did he have to be sent away?

Answer : Yes, Bruno was a loving and playful pet. But, as he grew up into a large bear, the narrator and his son got concerned towards the harm that he could have made in future, so he was sent away to the zoo.