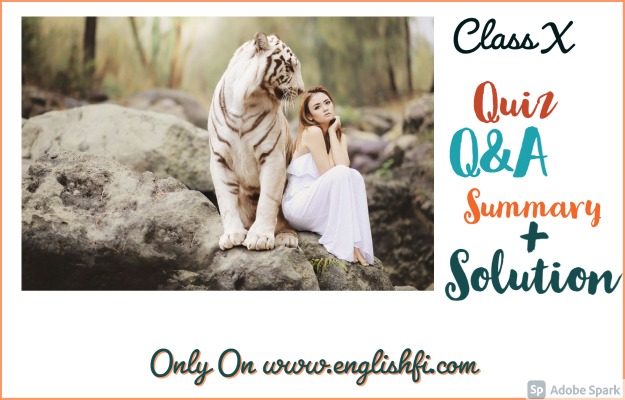 Today, I will be discussing the poem, ” A tiger in the zoo w composed by Leslie Norris“. I ensure you will get a complete idea to write the summary, central idea and explanation of the poem orderly. You will be able to write the specification and figure of speech used in this poem too. After reading this page you will find the secret to score outstanding marks in the board examination.

About the Poet: Leslie Norris

George Leslie Norris (1921-2006) has been a known figure in English literature. He had been a prize-winning Welsh poet and short story writer. He is considered a popular Welsh writer of the post-war period and his literary works made his identity in the world of literature. His famous works are Finding Gold, The loud winder, phoenix living poets series: Ransoms, etc.

About The Poem: A Tiger in the Zoo

The poem ” A Tiger in the Zoo” illustrates the helplessness and torment of a caged/locked tiger that lives in a zoo. The poet reveals what his life could be if he had been in natural habitat. The poet wants to explain the condition of animals that are caged by human beings for their own fun and make a contradiction with free tiger who lives in the jungle

Summary Of the poem: A Tiger in the Zoo

The poem starts with a physical description of a tiger that is very appealing in its look and is walking in a little cage. He has beautiful/vivid stripes on his skin/body and has velvet-like soft padded feet.

But the tiger seems unhappy and quite angry about being imprisoned in the cage. The poet assert/say that if the tiger was not locked to the cage, he would have been hiding himself beside the long grass near some water body just to catch its prey that is a chubby deer. He also would have terrorized the villagers around the jungle.

But in reality, it is just the opposite. He was confined in a cage which was made up of concrete and iron (building material) and he was helpless and incapable inside.

He could not exhibit his strength to the visitors, therefore, he never roars at them. The tiger is illustrated as being powerless and agonized by the writer. He says that during the night also he feels alone and hears the voice of the patrolling vehicles of police and looking at the sky.

The life of the tiger is totally changed in the cage. He is not able to express his real personality in it. The poet is trying to say that the animal which is famous for its fearlessness and freedom is confined and sad due to the human beings who want to derive pleasure by looking at him in the zoo cage.

Note: Hindi version is a machine translation so you are recommended to rely on English version.

A Tiger in the Zoo Poem, Explanation and literary Devices

On pads of velvet quiet,
In his quiet rage.

The poet tells us that the tiger that is caged in the zoo moves around it under his bright coloured skin. He also says that the tiger can walk only a few steps because the cage is not specious and it is not easy to move in it. One cannot hear his footsteps because he has a very soft paw, like velvet because of which there is no sound of the tiger’s footsteps. The tiger tries to control his anger by quietly walking in the limited area of his cage. He is angry because he is not free.

He should be lurking in shadow,
Sliding through long grass
Near the water hole
Where plump deer pass.

Lurking: To be hidden as to wait for your prey

The poet says that if this tiger was free, he would have hidden himself behind the long grass near the water bodies so that he could easily catch a deer in order to have it as its food. Basically, the poet wants to say that the actual life of a tiger is to live in a natural habitate where he could catch his prey and eat it but the tiger in the cage can not do so.

He should be snarling around houses
At the jungle’s edge,
Baring his white fangs, his claws,
Terrorising the village!

The poet asserts that if the tiger would have been free, he would have snarled around the houses located in the outer area of the forest. He would terrorise/threaten people with his sharp teeth and claws. This would create fear among the people living in the villages.

But he’s locked in a concrete cell,
His strength behind bars,
Stalking the length of his cage,
Ignoring visitors.

Concrete: building made of bricks, cement, sand and water

Now the poet comes to the reality of the tiger that is inside the cage. He says that the tiger is confined in a strong cell which is made of strong building material. He further says that as the tiger is behind bars, so his ferociousness is also behind the bars. He just stalks in the cage. He never tries to terrorise the visitors because his power is restricted by the cage. Therefore, he never tries to terrorise the visitors as he cannot attack them.

He hears the last voice at night,
The patrolling cars,
And stares with his brilliant eyes
At the brilliant stars.

Patrolling: to guard, to vigil

Question and Answers: A Tiger in the Zoo

Q1- Read the poem again, and work in pairs or groups to do the following tasks.

(i) Find the words that describe the movements and actions of the tiger in the cage and in the wild. Arrange them in two columns.

(ii) Find the words that describe the two places, and arrange them in two columns.

Lurking in shadow, sliding through the long grass, snarling around houses, baring his white fangs, terrorizing the village

Q2- Notice the use of a word repeated in lines such as these:

(i) On pads of velvet quiet, In his quiet rage.

(ii) And stares with his brilliant eyes At the brilliant stars.

What do you think is the effect of this repetition?

The poet has repeated the words to give a nice impact to his poem. Like the use of quiet with velvet pads describes that the tiger has to walk in the limited area of his cage. He cannot run as he would have done had it been in the forest. Whereas ‘quiet rage’ shows the hidden anger inside him which has grown stronger because of his confinement in the cage. The next word he used is ‘brilliant’. The word brilliant in the first line means the twinkling bright stars and the brilliant words used for the tiger’s eyes shows the sadness of the tiger who would have led a free and fearless life if it were in the jungle.