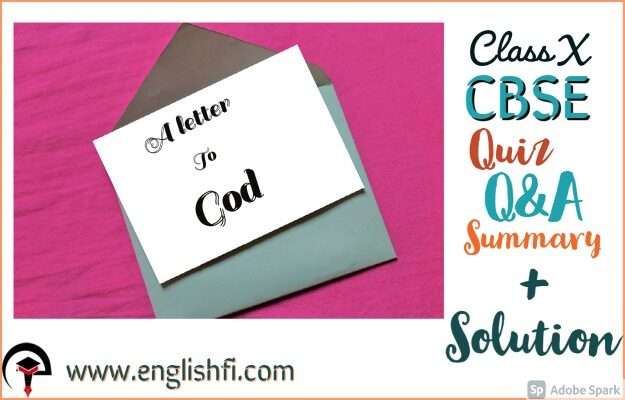 Welcome to English Filament where you get everything related to English Language in hand. We put our best effort to provide very apt and pertinent study materials for all boards of Learners including CBSE, ICSE ISE and UP Board. In this post I will give the following points regarding the Chapter ” A Letter to GOD” Written by ‘Gregorio Lopez Fuents’.

Gregorio López Fuentes was born on 17 November 1895, Veracruz, Mexico. He was a famous Mexican novelist, poet, and journalist. He was one of the leading chroniclers of the Mexican Revolution too.

Background and Context of the Lesson ” A Letter to GOD”

This tale, “A Letter to God” by G.L Fuentes reveals the idea of having an innocent belief in God. The story is written in a Latin American country. Lencho, the peasant, who is the protagonist of this story, writes a letter to God urging help from the almighty after getting his entire crops destroyed by a devastating hailstorm.

Although his wishes meet his demands partially, he is ungrateful in the end and questions on the honesty and modesty of the post-masters who actually helped him with money (anonymously) in the name of God so that Lencho’s trust remains as it is.

Summary of the Lesson’A Letter to God’

“A Letter to God” by G.L. Fuentes exposes the innocent and firm faith of a farmer in God. It begins with a farmer, named Lencho who is anticipating a fruitful rain shower to nourish his land of corn.

He hopes that his harvest is going to yield him huge profits as in previous years. To his top emotion, rainfall did happen but sooner, it turned into a hailstorm destroying his entire crop field.

The loss creat a threat to the family’s survival as their entire livelihood was dependent on the year’s yield. Although disheartened, the family had a robust conviction in the almighty God.

Lencho, despite having worked day and night at the field, knew how to write and thus, decided to write a letter to God describing his situation and seeking help. He left for the town to post his letter addressed “To God”.

When the letter noticed by the postmaster, he was amused by it, but then motivated him. He got an idea to do something for the farmer so as to keep his immense belief intact.

He wishes to contribute from his salary and collects money from his crew and friends who willingly contributed for same as an act of charity. In his full capacity, he could only collect 70 pesos which he enveloped to make it seem like a reply from God.

When the writer (Lencho) opens the envelope, he does not surprise at all, but instead, he gets angry on finding that the amount is less than what he had expected.

He again writes a letter to God conveying his disappointment and distrust in the employees of the post office whom he thought had stolen the remaining amount.

Poor with unshaking Belief in God: The living condition of Lencho and his family is the evidence that he was a very poor farmer. His family livelihood was solely dependent on the yield of the crop and farming. Lencho was also a strong believer in God. Having the entire loss of his crop, he writes a letter to God seeking financial help. After receiving the envelope he does not surprise at all. It depicts that Lecnho was not an ordinary believer but had a firm conviction on God.

Optimistic and Hopeful: The life, action and expression of hope, reveals that Lencho was a very positive person and optimistic personality. The excitement and hope to see the clouds and weather he anticipated that the rain shower would be fruitful for his crops.

Hardworking and Laborious: Indeed, farmers across the world are taken as an example ‘hardworking man’. Similarly, Lencho was also very laborious and honest towards his farming. He used to spend day and night in his field just to yield the adequeat amount of crop so that he could earn enough money for his livelihood.

Satisfied with the Decision of God: The unshakable believes and satisfied gestures of Lencho in this story shows that he was satisfied with God’s decision, thankful for available limited resources which he had.

Q 1 What did Lencho hope for?

Ans. 1 Lencho anticipated a fruitful rain for his better crop.

Q 2 Why did Lencho say the raindrops were like ‘new coins’?

Ans. 2  To see the rain shower, Lencho was glad because everything was going as per Lencho’s plan and he had positive conviction that his harvest would yield adequate profits. Thus, he felt the droplets as “new coins, the larger ones being equivalent to ten pesos and smaller ones, five pesos.

Q 3. How did the rain turned into hailstone? What happened to Lencho’s fields?

A. Soon after the rainfall had begun, the wind became strong leading to a hailstorm. As a result of which, Lencho’s crop fields got withered, the trees had shed their leaves and the flowers had fallen.

Q4. What were Lencho’s feelings when the hail stopped?

A. Lencho was deeply sad and his soul was filled with disheartened feelings.

Q5. Who or what did Lencho have faith in? What did he do?

A. Lencho had unwavering conviction (faith) in God. Thus, he took the decision to write a letter to God conveying his grievances and asking for 100 pesos for survival and recovering the loss of crops.

Q6. Who read the letter?

A. A postman of his town who was also an employee of the post office read the letter.

Q7. What did the postmaster do then?

A. The postmaster was surprised at Lencho’s unwavering faith in God. Thus, to retain it, he decided to collect money for him from his friends and colleagues.

Q8. Was Lencho surprised to find a letter for him with money in it?

A. Lencho was not surprised at all seeing the letter because this is what he was expecting. Instead, he was angry when he found that the amount was less than what he had asked for.

Q9. What made him angry?

A. Lencho was disappointed when he found that the money was less than what he had asked for.

Q10. Who does Lencho have complete faith in? Which sentences in the story tell you this?

A. Lencho has immense faith in God. These lines are evident to this fact: “Lencho showed not the slightest surprise on seeing the money; such was his confidence – but he became angry when he counted the money. God could not have made a mistake, nor could he have denied Lencho what he had requested.“

Q11. Why does the postmaster send money to Lencho? Why does he sign the letter ‘God’?

A. The postmaster did not want to break the trust writer’s faith in the almighty, and thus, out of virtuous intentions, decided to collect money for “an act of charity”. He also signed the letter in the name of God to conceal his identity as he wanted Lencho to think it was actually a reply from God.

Q12. Did Lencho try to find out who had sent the money to him? Why/Why not?

A. No, Lencho did not try to find out the sender because he was very optimistic about the existence of almighty and that, his letter is actually received and replied to, by God. It was his unshakeable faith that made him not question the identity of the sender.

Q13. Who does Lencho think has taken the rest of the money? What is the irony in the situation? (Remember that the irony of a situation is an unexpected aspect of it. An ironic situation is strange or amusing because it is the opposite of what is expected.)

A. Lencho thought that it is the postmaster or the employees of the post-office who had stolen his remaining amount, as is evident from his second letter to God where he requests the deity not to send money by mail next time.

The irony here is that, it was actually the postmaster and the employees who had collected the money out of their clean intent to keep Lencho’s faith intact, but are the ones who ended up getting blamed for stealing the missing amount.

Q 14. Are there people like Lencho in the real world? What kind of a person would you say he is? You may select appropriate words from the box to answer the question.

A. No, it is hard to find people like Lencho in reality. Lencho is naive and unquestioning because of his lack of judgement about the actual physical existence of God. He did not question receiving an actual reply from the almighty. Also, he is ungrateful in some manner because on seeing 70 pesos, he is not happy but instead, complained about the missing 30 pesos.

Theme of the Lesson ‘The Letter to God’

Message of the Lesson ‘A letter to God’

The story ‘A Letter to God’ by G.L. Fuentes expresses a strong potential of man’s unwavering conviction in God. It teaches the readers that if a man has child-like faith in God, he can accomplish anything considered impossible. If with this faith man asks God for help, God responds through His own invisible channels and fulfills man’s any urgent needs.

In this story, Lencho has been depicted as a truly spiritual man. He had firm faith in God’s kindness and generosity. After his crop was destroyed in a storm, he wrote a letter to God requesting Him to send him 100 pesos. His faith was rewarded. Indeed, God helped him through the postmaster.

Just believe that when the best thing are going wrong God will always be there to make you strong.

When you need God knows. When you ask God listens. When you believe God works. When you pray miracle happens.