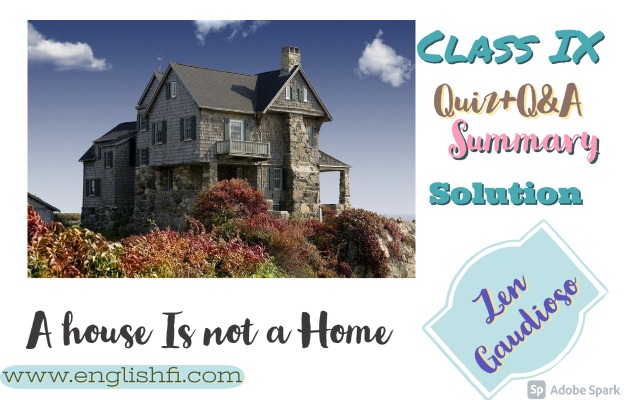 You, exactly landed on right Place!

Today, I will dive in deep to discuss all the important points of the Chapter ‘ A House Is Not A Home’ written by Zan. I ensure you will get a complete idea to write the summary and explanation orderly. You will be able to write a good answer. After reading this page you will find the secret to score outstanding marks in your examination.

Theme of the Lesson: A House Is Not A Home

The story speaks about dealing with loneliness, and joyful participation in life. It also brights up the fact that if life snatches something from you, it returns double in quantity.

Life is not mean to easy, it’s meant to be lived. Sometimes happy, other times rough. But every up and down, you learn a lesson that makes you strong.

Summary Of the Lesson: A House Is Not A Home

The story revolves around a boy Zan, who recently has completed his junior section at school, and has shifted to a new school where he feels very upset as he misses his old school. He despaired too because he had lost his seniority and was a junior there.

In addition to all his plights, his house caught a vigorous fire. In that, he lost everything except few papers, and photographs of his father, who had died when Zan was too young. He along with his mother, spent that night at his grandparent’s place; and the next morning when his mother forcefully sent him school, he had to borrow shoes from his aunt. In those flames, he lost his beloved cat, whom he rescued when she was a kitten.

This depressed him so badly that he completely lost his interest in the school. But gradually he realized that he needs to be practical in order to bring his life on track. As all the cash, credit cards, and identity proofs had become ashes, his mother borrowed money from his grandparents to build a new house, give rent, buy clothes, etc.

Now when Zan was visiting his new school, one day few students took him to a room where he found a table full of things like books, stationery items, clothes, etc which had been collected by his classmates to help him. This event snatched all his loneliness, as he had formed friends, who actually cared for him. This pushed him out of the depression and made him understand the beauty of life.

One day when he visited his rebuilding house with his friends, a kind woman returned his cat which had run away on being scared of the fire. Now he was having friends, a soon-to-be-completely-built new house, and his beloved cat. So in the end, life returned him all the things, it once snatched from him.

When life gives you a hundred reasons to cry, show life that you have a thousand reasons to samile.

Difficult Words and their Meanings

Freshman: a student in the first year of high school, college or university

Purring: sound made by cat

Swatting: to hit something

Destined: future developed as per a predestined plan

Outcast: a person rejected by society

Zombie: a dull and apathetic person

Milling around: moving around aimlessly

Curb: edge of the pavement

1. What does the author notice one Sunday afternoon? What is his mother’s reaction? What does she do?

Answer : While he was doing his homework, author saw smoke coming in through the ceiling. Soon the room was full of smoke. He along with his mother ran out of the house, but after leaving him out, she ran inside to rescued some documents and his father’s photographs as those were his only memories with them.

2. Why does he break down in tears after the fire?

Answer: Zan broke down in tears after the fire because along with his house and his accessories, he lost his beloved cat too. Initially, he was sad because he had left his older school to get admitted to a new one, he did not have his old school friends and teachers, and was not even familiar with anyone here in this school.

3. Why is the author deeply embarrassed the next day in school? Which words show his fear and insecurity?

Answer: The author was embarrassed because he was dressed unusually. And in addition to that, he did not have his school bag and books. The words showing his fear and insecurity are –

2)The clothes I was wearing looked weird, I had no books or homework, and my backpack was gone.

3)I had my life in that backpack!

4)The more I tried to fit in, the worse it got.

5)Was I destined to be an outcast and a geek all my life? That’s what it felt like.

6)I didn’t want to grow up, change or have to handle life if it was going to be this way. I just wanted to curl up and die.

4. The cat and the author are very fond of each other. How has this been shown in the story? Where was the cat after the fire? Who brings it back and how?

Answer: The cat and Zan were very fond of each other. Every morning Zan would disturb the cat and wake it up. The cat would follow him, climb up his robe, sit in his pocket and sleep there, and would remain with him all the time. While he studied, it would hit her tail on his pen for entertainment.

After fire, the cat ran around a mile away, to save her life. There a woman found her, and she was with her till the cat re-joined the author.

The woman who found the cat returned it back, after a long struggling investigation to find her.

5. What actions of the schoolmates change the author’s understanding of life and people, and comfort him emotionally? How does his loneliness vanish and how does he start participating in life?

Answer: Sympathetic and understanding behaviour of his classmates changed Zan’s understanding of life. When his classmates gifted him stuffs like- clothes, books, stationery items, etc.; and invited him to their places, his loneliness vanished and he started enjoying life.

6. What is the meaning of “My cat was back and so was I”? Had the author gone anywhere? Why does he say that he is also back?

Answer: By the phrase, “My cat was back and so was I” the author expressed his joy and excitement of getting her back when she was presumed to be dead.

No, he had not gone anywhere. Zan said that he is also back because now he was not in the guilt of being the reason for cat’s death, as he had forgotten to take her out along with him, on the day of fire. Now when his cat was back, he was also back to life.